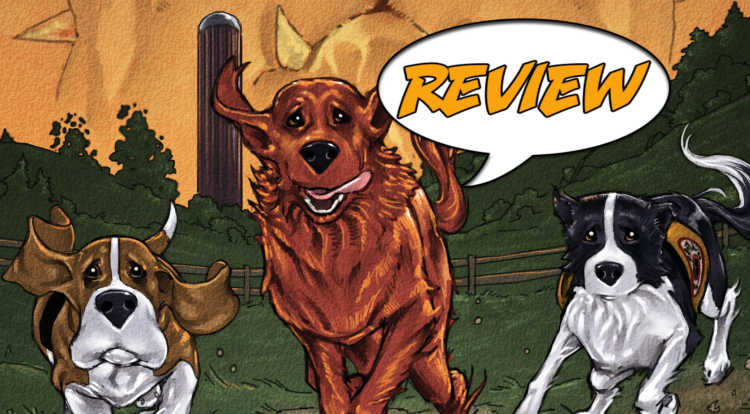 Rover Red Charlie #3 picks up several days after the events of issue 2. Charlie, our service-dog-cum-narrator, and his two pals make it to a farm in what can be safely assumed to be rural New York. The most pressing question is – how do they feed themselves in the absence of feeders? The answer presents itself in the form of a farm full of chickens and it is here that the horror and the hilarity begins. Garth Ennis is hardly a man I would credit with being funny, but when Red attacks one of the chickens outright and the birds shout expletives it is very nearly the most honest and amusing things I’ve seen on the page. Charlie and Rover aren’t much for the idea of killing and gorge themselves on an abandoned nest of eggs in the meantime and for a few brief panels everything seems right with the world.

Sartre is famous for saying “Hell is other people.” and during the course of Rover Red Charlie #3 we learn that Hell is other dogs. Bingo (I know you are singing the song, you’re welcome for that), is a dorky loner who befriends the troop briefly and informs them that there are some feeders still alive across the big splash (even bigger than the big splash they know, which is to say, the Atlantic Ocean). Bingo makes himself scarce in the face of Herman – the biggest, scariest dog to have comes across the pages thus far. Not only is Herman huge, scarred and an obvious killing machine, but he has a feeder of his own that seems less zombie-esque than the rest. This feeder lives enslaved to Herman and, where Ennis gave us humour before, with the fate of the feeder we witness his ability to be truly nasty. For the time being I will leave that up to your imagination, but, suffice it to say, that as a former service dog Charlie wants to free the feeder.

One botched rescue attempt later shows us Red’s true bravery (for all the emptiness in his head), and does away with Herman and his feeder … for now … Rover, Red and Charlie end the issue resolving to head for the big splash, seek out what non-zombified feeders there may be and hopefully find a sustainable food supply. For a story focusing around three dogs whose chief dialogue is “I’m a dog!” in place of barking, Garth Ennis spins a truly frightening tale across a contagion ridden landscape, while at the same time he presents the reader with the hope and optimism anyone who has ever interacted with a dog is familiar with.

Michael Dipascale presents the readers of Rover Red Charlie #3 with art that is truly beautiful as often as art that is truly chilling. Rover, Red and Charlie all look like their respective breeds, but with the cartoonish tendency toward smiling that one would expect of a domesticated canine. The simple line work and bright water-coloured look of the animals stands in stark contrast to the feeders we see.

The human characters are a similar model to Crossed (another Avatar Press book), and what scenes of violence and depravitypresented in the issue are bright and startling. In much the same way Dipascale’s scenery is something we’ve seen in the real world before and it is because of these places and animals we know that when something depraved happens we are woken up a little bit. Some readers (not unlike myself), may even be so startled that we skip past these moments in search of more sweet rolling-in-the-grass moments.

What Michael Dispascale puts on the pages of Rover Red Charlie #3 does nothing but serve the story Garth Ennis is telling. It oscillates between cartoonish and funny and brightly horrifying and I could not imagine a better overall package for this story.

HALFWAY TO THE END

Issue 3 of a 6 issue miniseries and I have no idea where Rover Red Charlie is about to turn next. As mentioned above, Garth Ennis and Michael Dipascale work together seamlessly to bring the best version of this story to the readers. The dichotomy of humour and horror will keep me reading and is definitely worth the time of any reader with even a passing interest.