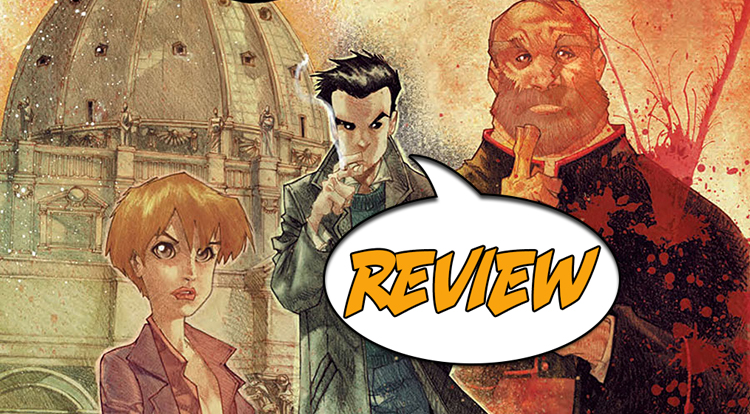 Charlie Northern is a London detective working for Scotland Yard. A chronic smoker and ex Catholic, one day he is visited by his old friend, Cardinal Marcel LeClair. His friend sends Charlie to the Vatican to investigate the death of Cardinal William Richleau, a person of interest in Northern’s past and second in line to be Pope. However something is not right with his investigations. From the botched crime scene to Richleau’s mysterious fall from a window, Northern knows there are things the Vatican is hiding from him.

Previously in Revelations: Cardinal Richleau falls out of his office window onto the rooftop of a Vatican building where he is attacked by a mysterious assailant. Before Richleau’s attacker can stab him off with his strange dagger, he is ambushed by five Vatican guards. The dagger is taken to Cardinal Toscianni for safekeeping. Meanwhile, Charlie Northern travels to the Vatican with his friend, Cardinal LeClair to investigate Richleau’s. After visiting the botched crime scene, Northern is confronted by Cardinal Toscianni who warns him to tread lightly in his investigations. Northern looks into the room Richleau fell from and realizes the cardinal did not fall, but was forced out though the window.

Paul Jenkins continues his religious mystery comic with Revelations #2. Using his deductive skills, Charlie Northern pieces together more clues involving Cardinal Richleau’s death. However he is plagued by the lack of evidence and secrecy of the Vatican. Paul Jenkins’s plot is similar to a Dan Brown novel, using the comic’s religious background and conspiracies to hold everything together. The comic slowly builds to the conclusion of each issue by placing subtle clues the reader may or may not notice. It is a great way to create mystery and intrigue for each issue. The main character of Revelation, Charlie Northern, is a PG-13 version of John Constantine. His rough British mannerisms, sarcastic exterior and chronic smoking are all characteristics that invoke similarities to the classic Vertigo character. Still, Charlie Northern lacks the foul mouth and magic abilities of John Constantine so he is not an exact replica. This issue also introduces a female character in a primarily male cast. Lucille Pelliccia is an outside accountant who was working with Cardinal Richleau. Through her interview, Charlie is able to pull together more conclusions regarding the cardinal’s death. So far, her character serves to move the narrative further, however she may have a greater purpose in future issues. Overall, Paul Jenkins provides solid writing for a mystery comic that is easy to understand.

Humberto Ramos provides his cartoon style artwork for Revelation #2. Sometimes, with artwork similar to Ramos, the subject matter becomes toned down and childish. However, the artist is able to incorporate some adult themes into the panels, which keep the dramatic elements of the plot intact. Ramo’s art style also allows him to create uniquely designed characters that do not fit conventional human structure, such as the short and wide nosed Monsignor Albertini. Each character is original and easily distinguishable from one another. Although some panels have odd choices in perspective, Ramos captures the essence of Vatican City and Rome in his background scenery. The colors are also well done, mixing charcoal based shading with digital artistry.

Paul Jenkins and Humberto Ramos combine their talents to create an interesting comic in Revelations #2. Although the comic book bares some resemblance to other works of fiction, the plot is properly structured and well-written. Meanwhile, Ramos’s art style adds a unique representation to the comic. Overall, I look forward to what happens in Revelations in upcoming issues.