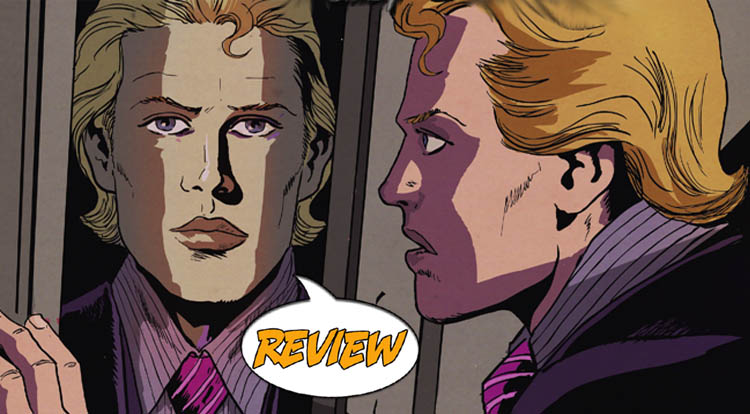 Rich jerkwad Trevor Richmond has finally bought his way out of all consequences for his actions, by purchasing another person’s entire life and identity.  Of course, Trevor doesn’t realize that his comeuppance is going to find him one way or the other, since his new home address is squarely located…  in The Twilight Zone.

Your Major Spoilers review of The Twilight Zone #2 awaits!

Previously in The Twilight Zone:  After a life of excess, greed and the misery of others, Trevor Richmond framed his boss for embezzlement, ditched his fiancee and used the money he had stolen to purchase a new identity through a mysterious brokerage that promised him a whole new life.  The process was successful, and Trevor’s transformation left him unidentifiable and free from the consequences of his own bastardry…

Of course, Trevor is also troubled by the televised confession of someone who looks just like he used to, using his name, and coming clean for all his old crimes…

PICKS UP WHERE #1 LEFT OFF…

Stephen and I reviewed #1 of the new TZ adaptation on Dueling Reviews, during which show I remarked that the first issue seemed to end in an odd place, especially given the context of presenting us with a Twilight Zone episode (traditionally, but not always served in 30 minutes segments.)  This issue opens moments after the first ended, with Trevor witnessing the confession of a man using his face, and setting off to find out what in the world is happening.  The art, which was a little bit shaky but acceptable in #1, is a bit less consistent here, combining a thick outer line and a weirdly pastel color palette, leaving the art atonal to the seriousness of the story being told.  Trevor tries to find out from the enigmatic Mr. Wylde what is happening, but finds out only that, as part of the contract to get him a new life, his old life was forfeit.  When Trevor tries to find his replacement, everything (including our story) spins out of control.  Through a rather convoluted series of events, he ends up in a running gun battle with the security guards at his old firm, fleeing in a stolen vehicle, only to immediately run into his doppelganger.  It feels like there’s a lot of filler in the story, and while I understand the expectation of karmic retribution in a TZ story, the events that lead to Trevor facing down an entire security force with a gun feel very forced…

SPINNING OUR WHEELS A BIT.

I’m not certain if this story was written for the comics by Straczynski or adapted from a script he wrote (he was a writer and story editor on the 80s revival series), but this issue takes nearly twenty pages to transition our main character from realizing someone has stolen his old life to going to his old apartment (a development that he chalks up to “instinct” while fleeing police in a stolen vehicle), with looong diversions in between that don’t quite gel for me.  The art has some excellent moments (Trevor’s face when he realizes what he’s gotten into is a nice panel), but things are up and down as the issue continues, with some weirdly cartoony/bloopy facial features appearing throughout the story, especially on the female characters.  With issue #1, I worried that the pacing of a multi-issue arc story would undermine the essence of the Twilight Zone, and this issue furthers my concerns, admittedly offering some deeper character work, but ultimately feeling fatalistic and futile, leaving me wondering if this story couldn’t have been trimmed down without suffering.  Two issues in, and we still haven’t gotten any real clues as to what might be happening here or the motives of Mister Wylde’s life-swapping scheme.

THE BOTTOM LINE: NOT QUITE ROD SERLING.

It’s not as thought this is a bad issue, just an inconsistent and perhaps overwritten one, with the full story seemingly set to take place over a four issue span, something which (if it is the pattern for all TZ stories to follow) may not well serve the series in a quest for longevity.  The Twilight Zone #2 is a mixed bag, with inconsistent art, and an interesting mystery being ill-served by the format & pacing, earning a middle-of-the-road 2.5 out of 5 stars overall.  Often times, I’ll commit myself to a six-issue run of a series to give it a chance to grow into its own conceit, but I’m not entirely sure this book will last more than twelve issues if every issue moves this ponderously…