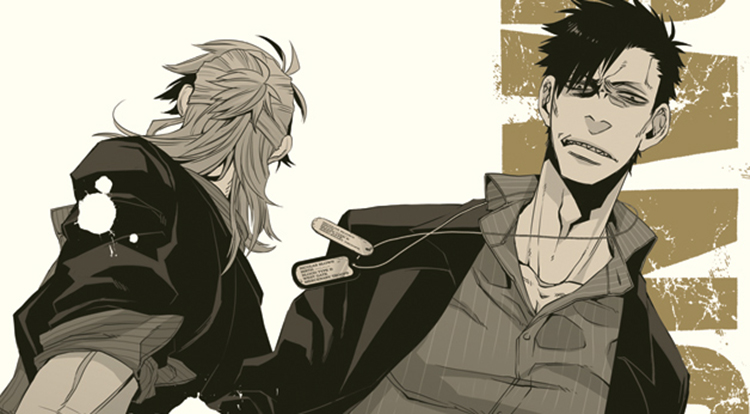 VIZ Media, LLC (VIZ Media), the largest distributor and licensor of manga and anime in North America, delivers a knockout punch with the launch of the explosive new manga (graphic novel) series – GANGSTA. – on February 18th.

The tense crime thriller by creator Kohske will be published under the VIZ Signature imprint, is rated ‘M’ for Mature Readers, and will carry an MSRP of $12.99 U.S. / $14.99 CAN. Each print volume features a special two-sided full color frontispiece insert.

In the city of Ergastulum, a shady ville filled with made men and petty thieves, whores on the make and cops on the take, there are some deeds too dirty for even its jaded inhabitants to touch. Enter the “Handymen,” Nic and Worick, who take care of the jobs no one else will handle. Until the day when a cop they know on the force requests their help in taking down a new gang muscling in on the territory of a top Mafia family. It seems like business (and mayhem) as usual, but the Handymen are about to find that this job is a lot more than they bargained for.

“GANGSTA. is an incredibly accomplished and addicting take on the neo-noir crime genre,” says Leyla Aker, Vice President of Publishing and GANGSTA. Editor. “The storyline features plenty of high drama, low comedy and, of course, tons of action, all rendered in a fresh art style that’s as sharp-edged as the violence it depicts. The antiheroes of the story, Nic and Worick, are easy to root for, as is Alex, the damsel in distress. But no one’s quite what they seem, and the series pulls you in as the mysteries of their pasts are slowly revealed.”

Kohske made her manga debut in 2009 with the short story “Postman” in Shonen GanGan magazine. Her first series, GANGSTA., began running in Monthly Comic Bunch in 2011 and became an instant hit. More information about Kohske’s work can be found on her website at: http://gokohske.o-oi.net/. For more information on GANGSTA., or other manga titles from VIZ Media, please visit www.VIZ.com.