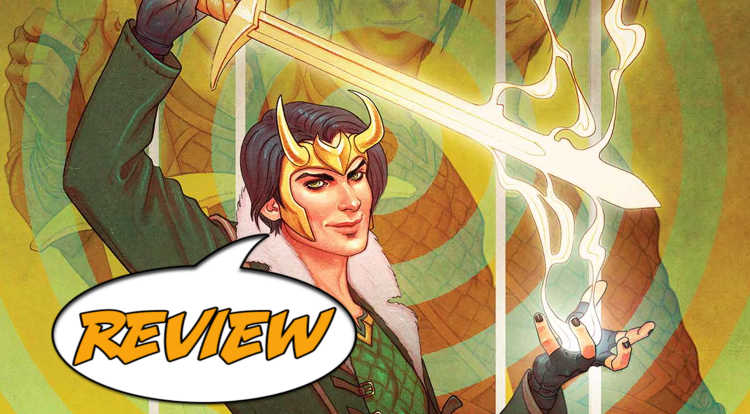 The much beloved God of Mischief and Lies is back! The reigning King of tumblr and Prince of Asgard returns more handsome than he has ever been – and this time he’s on a mission for the All-Mother with a shiney new sword! Loki is determined to rewrite his history on Asgard and Migard. The question is: whether we believe him or not? YOU’RE IN FOR A BIG SURPRISE

Not so very long ago Loki died. Then he became reincarnated (sort of), into a little nugget version of himself in Journey Into Mystery and eventually joined the Young Avengers. Meanwhile, in Marvel Studios-land Tom Hiddleston brought the antagonistic Norse God to the big screen and tapped into the je ne sais quoi that appealed to rabid fangirls everywhere.

Marvel has, in their supreme wisdom, granted the character his own title and adolescence and the product is highly amusing. Teen Loki is discovered singing a variation on the Wicked soundtrack from his shower. It is quickly revealed that he has been sent to Migard at the behest of the All-Mother and her advisors. Where does the son of Laufey go first but Avengers’ Tower? Naturally.When he is unsurprisingly captured Loki’s life is threaten by Natasha, Clint, Bruce, Tony, Steve and Thor (the movie team!), but his illusions come in handy and he manages to slip past them. The irony in his deception is Loki’s insisting that he is different from his past-self even though he reaches into the exact same bag of tricks to get his way. He manages to wipe all the nefarious deeds of past-Loki from the Avengers’ database only to be caught. Thor is, shockingly, insistent that his brother be murdered on the spot and goes after the teenager with his bear-and-God-like hands. Luckily, Loki has the aforementioned sword close at hand and shoves it through the Thunder God’s ribcage. It turns out this is a spectacular choice as it excises a dark red suspiciously-similar-to-the-movie-Aether-looking-thing from Thor’s bodily which Loki easily subdues only to hand the substance over to the All-Mother et al on Asgard. Job well done and Loki is shortly dismissed and the reader is let into the big secret of Loki: that you yourself will have to find out!

It is worth mentioning that, amid the swirling plot, Thor (newly pure), and Loki do have a nice brother-to-brother moment before the inevitable escape from shackles. It is the single best scene in the entire issue.

This issue is narrated from Loki’s perspective and Al Ewing (primarily of Judge Dredd fame), does a great job at adopting the sarcastic tone employed and perfected by Kieron Gillen’s Young Avengers run, but with the self-deprecation of adolescence. Al Ewing knows the audience he is writing for in this issue and he uses Loki’s internal narration to keep the tone light and playful and, dare I say, mischievous. The only downside in this issue is that, because it is the first, it gets a bit crammed with all the breadcrumbs laid out along the way. There are so many seeds planted that by page 22 the story feels a bit laced up. Hopefully later issues in this run will be a touch more focused and, given that this is the beginning of a series, I like to think it will be.

Let’s get the observation everyone has made about the art in Loki: Agent of Asgard #1 since the first cover was revealed out of the way: the updated character design is, unsurprisingly, reminiscent of Tom Hiddleston.

Sexy-teenaged-Loki is just that, if the pop star look is your thing. He appears on the second page in the shower hairless and naked from neck to navel. It’s a not-so-subtle play to bring in the female readers (which is to say: cinematic universe fangirls), and it is nothing short of effective on that front. Lee Garbett does a good job of the art – although it’s obvious when he’s rushed or isn’t particularly interested in what is taking place on panel. From time to time the art gets a bit squishy (for lack of a better word), but he has the clean lines that I’ve come to expect from a Marvel book and has been coloured with the Loki green at all available opportunities.

Loki: Agent of Asgard #1 is so very, very much fun! However, I think it bears keeping in mind that this series is being marketed to teen and 20-something tumblr fangirls and will likely be enjoyed by them/us above all.