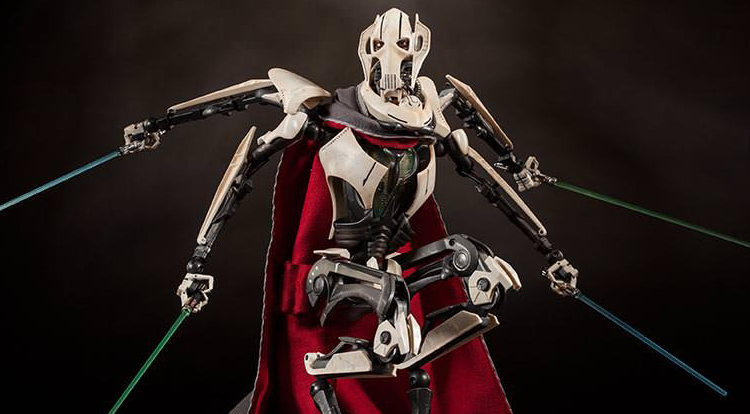 The four-armed villain, General Grievous, may have made his first appearance over 10 years ago in the Star Wars: Clone Wars, but he is just now being put into statue form courtesy of Sideshow Collectibles.

Standing at 16 inches tall and weighing 6 pounds, General Grievous is ready to take on any Jedi statue you may have in your collection. One of the more iconic abilities of Grievous is how he is able to wield four lightsabers at once and this statue doesn’t disappoint when it comes to that. Grievous comes with four ignited lightsabers and two pairs of attachable arms to either show him with two fused arms or the split apart arms.

Lightsabers aren’t the only weapon this statue comes with a DT-57 “Annihilator” Heavy Blaster and an Electro Staff complete with removable energy clusters.

As a Slideshow Collectible exclusive comes with the statue in the form of a battle damaged mask that can be swapped out with the regular unscathed one.

I have to admit that I was never a huge fan of the General Grievous character in the animated series or Revenge of the Sith, but I can’t help but admit how great this figure looks. The Slideshow Collectibles team captured the great character design of this villain with the metal and sealed the deal with the highly detailed fabric cape.

This General Grievous statue will cost you $249.99 as a pre-order and will be shipped out sometime this month.