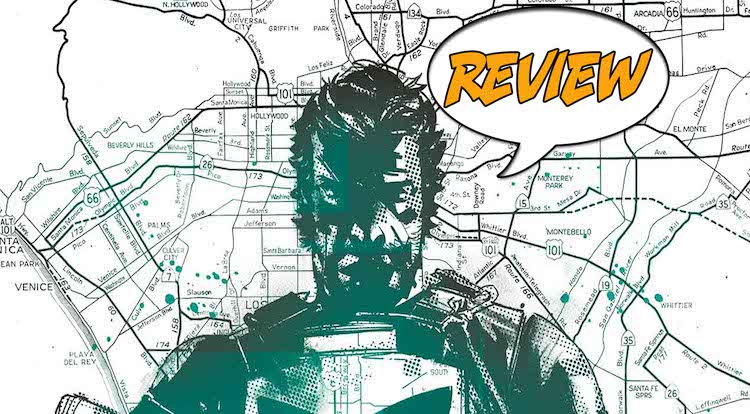 The Punisher is back a ready to kill some criminals in his All-New Marvel Now! ongoing.  But how does Marvel make this any different from previous series?  By sending him to L.A. of course!  This reviewer loaded his guns and sat down to have a look. Previously in Punisher: Frank Castle shot a lot of bad guys in the face.

The problem with the Punisher as a character is most of his stories are the same. Frank finds criminal organization, dispatches goons from said organization to gain information, has a big shootout, etc. That’s not to say there hasn’t been any original ones and I have enjoyed quite a few, but many have become bland. I’m sad to say moving Frank to the City of Angels doesn’t change the formula much.

This first issue shows Frank hunting down the location of drugs being shipped to L.A. It’s a nice way to get the Punisher to the new setting but from there it’s more of what’s been seen before and could be a story told the same in New York. We see Frank learn the whereabouts of the drugs but it’s never clear exactly how long he’s been in L.A. It’s obviously long enough to make friends at a local diner and a name for himself but some time frame would have been appreciated. Edmondson does give some wonderful character moments, the best being with Frank’s relationships at the diner. It was nice to see him interact with others in a friendly manner rather than be the angry loner. There are also some nice Punishery moments, my favorite involving a shotgun and a hand, and his method of dispatching the drug location was wonderful. Otherwise, it’s a typical Punisher comic and unfortunately brings nothing new to the table.

Mitch Gerads’ artwork is appropriate for the Punisher, giving a gritty crime story look and I loved his redesign of the costume as it looked more practical. My biggest problem is many of the characters look like they’re squinting. The whites of eyes rarely make an appearance and if not covered by the angel or facial expression then by sunglasses or other means. When they are seen some have problems such as pupils looking in different directions. Gerads is strongest in dark moments and the moody opening is a perfect example. There is a great part where Frank swims to the bottom of the page while talking about relief in drowning is finding which way is up. It’s a wonderful matching of dialogue and art and the strongest moment in the book. His thick lines also don’t always work well and it would have been nice to see moments similar to the beginning.

BOTTOM LINE: MOVE ALONG, NOTHING TO SEE HERE

Believe it or not, I was really looking forward to this issue. I like the Punisher and would love to read an original story that puts him in a new setting. This is not that book. The new city adds nothing to change the story and it’s much of what’s been seen before. There are some great little moments, the best surprisingly in friendly conversations, but not enough to make me want to continue reading. Mitch Gerads fits for a Punisher title but problems in the art pop up throughout. Unfortunately, it seems the Punisher has yet to find a firm footing in the regular Marvel Universe.