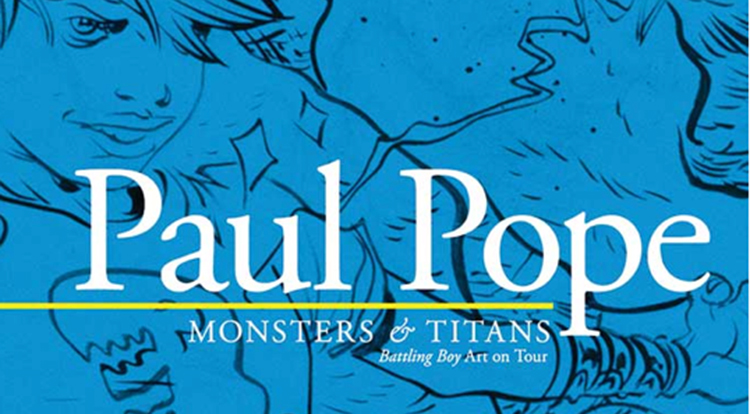 Paul Pope’s new graphic novel BATTLING BOY debuted at #1 on the New York Times bestselling list, and the original art is now the focus of a series of traveling art exhibits in the United States and Europe. Now Paul Pope enthusiasts can enjoy MONSTERS & TITANS: BATTLING BOY ON TOUR, a trade paperback that fans and collectors alike will want to own.

Collecting Pope’s large, lush original drawings photographed in detail from the actual art boards and with minimal editing, MONSTERS & TITANS features the art in its original format, with text in English, French, and Italian.

Also included in the volume is a critical essay from Comic Book Legal Defense Fund Executive Director Charles Brownstein and an essay from Pope himself on his process, technique, and personal influences.

A must for any Paul Pope fan, student, fellow-artist, or fan of the medium, MONSTERS & TITANS is a breathtaking compilation and celebration of the original art of one of the most critically-acclaimed American cartoonists of all time.