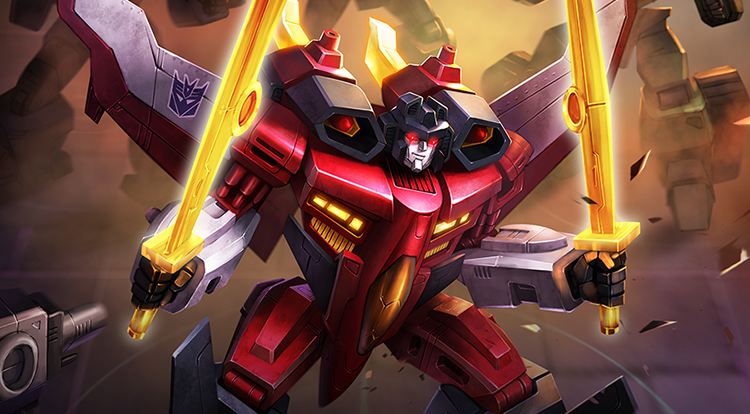 Dark Cybertron is coming to life in new interactive experience

Dark Cybertron is the first Team Battle episode in TRANSFORMERS: LEGENDS. It combines elements of cooperative and competitive gameplay that players have never experienced before this mobile game. In the Dark Cybertron episode players will join forces with the AUTOBOTS and DECEPTICONS to battle against a powerful and ancient enemy, the NECROTITAN, and fight to unravel the meaning behind mysterious new developments in the battle for CYBERTRON.

The new Dark Cybertron episode is available to play beginning on February 5 by downloading TRANSFORMERS: LEGENDS for iPhone, iPad, iPod touch or Android devices for free at: http://mobage.com/games/TRANSFORMERS-LEGENDS

As part of the collaboration between DeNA and IDW Publishing, players who take part in this week’s TRANSFORMERS: LEGENDS Dark Cybertron episode can also download a special issue of the Dark Cybertron comic book for free via the game. The limited release comic chronicles the latest developments in the battle between the Autobots and Decepticons from the fan-favorite series.

Save on Action Figures

About DeNA
DeNA (pronounced “D-N-A”) is a global leader of developing and operating mobile services including free-to-play games, the Mobage social games platform, e-commerce and other online offerings. Founded in 1999, DeNA is headquartered in Tokyo with offices and game development studios across the globe. DeNA Co., Ltd. is listed on the Tokyo Stock Exchange (2432). For more information, visit: http://www.dena.com

About Hasbro, Inc.
Hasbro, Inc. (NASDAQ: HAS) is a branded play company dedicated to fulfilling the fundamental need for play for children and families through the creative expression of the Company’s world class brand portfolio, including TRANSFORMERS, MONOPOLY, PLAY-DOH, MY LITTLE PONY, MAGIC: THE GATHERING, NERF and LITTLEST PET SHOP. From toys and games, to television programming, motion pictures, digital gaming and a comprehensive licensing program, Hasbro strives to delight its global customers with innovative play and entertainment experiences, in a variety of forms and formats, anytime and anywhere. The Company’s Hasbro Studios develops and produces television programming for more than 180 markets around the world, and for the U.S. on Hub Network, part of a multi-platform joint venture between Hasbro and Discovery Communications (NASDAQ: DISCA, DISCB, DISCK). Through the company’s deep commitment to corporate social responsibility, including philanthropy, Hasbro is helping to build a safe and sustainable world for future generations and to positively impact the lives of millions of children and families every year. It has been recognized for its efforts by being named one of the “World’s Most Ethical Companies” and is ranked as one of Corporate Responsibility Magazine’s “100 Best Corporate Citizens.” Learn more at www.hasbro.com.