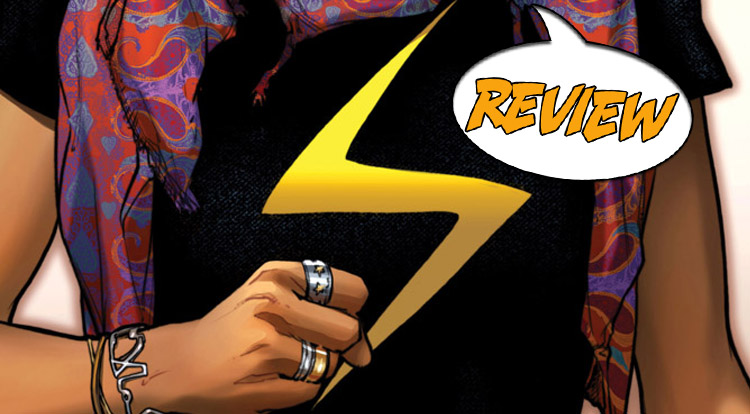 When Marvel announced that Kamala Khan was getting her own series in the all-new Now Marvel Newnow Meow all-now newness, there were those who erupted in outrage over a Muslim character getting a headliner spot.  Those concerns seem more than just a little bit small-minded, but either way, the larger question seems to be “Will her adventures be entertaining enough to make this title last the long haul?”  Your Major Spoilers review of Ms. Marvel #1 awaits! Previously in Ms. Marvel:  Kamala Khan is a superhero aficionado, a young girl growing up in the wilds of New Jersey who idolizes the likes of the Avengers, especially Carol Danvers, Captain Marvel.  Luckily for her, she lives in the Marvel Universe, where every adorkable teenager from Peter Parker to Richard Rider to Edwin Jarvis’ adoptive step-daughter, gets super-powers and ends up being some sort of super-duper, so the odds of something cool happening to her are in her favor.  She’s especially likely to get superhuman powers because of her alliterative name!  After interacting with Captain Marvel once or twice in Cap’s own title, she now has a book of her own, but in the wake of the Inhumans crash into Manhattan, there are a few surprises in Kamala’s future.

Our story opens, much like my classic fave-rave, ‘Clerks’, in a convenience store in New Jersey.  Right off the bat, Adrian Alphona impresses me, delivering a wonderfully expressive art job that makes Kamala and her friend Nakia immediately visually interesting.  The sequence is well-written, as well, deftly and quickly showing us the things we need to know about Kamala, her life, her friends and the jerkface teens of her home-town.  Transition to a clear dream sequence, as Iron Man, Captain America and Captain Marvel fight an evil space dragon threatening “Planet Unicorn” (a pastiche, it would seem, of ‘My Little Pony’, and a sequence I enjoyed), getting us inside Kamala’s mind.  It’s really hard to write teenage characters that feel like teenage characters, and in my experience, the writers who do it best (Bob Haney was one, Josee Whedon was another) lock into specific characters and give them depth.  The depiction of Kamala’s home life is warm and funny, reminding me somewhat of the late, lamented ‘Blue Beetle’ title, as we meet Ms. Khan’s brother, mother and father, and even get to see them battle over whether or not she can go to a party with the kids from school.  Interestingly, it seems that Kamala’s origins may be similar to those of Static, sneaking out to hang with people she knows she shouldn’t and getting involved in something way over her head.  Sometimes, those sorts of parallels hurt a story, here I found myself enjoying quiet nods to the fact that this isn’t the first teenage superhero in history, and what feels like conscious nods to what has gone before.

Of course, she sneaks out, and of course, it goes poorly for all involved, with cruel pranks and racist remarks from her schoolmates.  I do like the fact that the teenagers of Jersey City, while idiots, are idiots because they’re sheltered teengage boneheads and not because of their origins.  (I know at least one Faithful Spoilerite who was worried about a cliché ‘Jersey Shore’ portrayal, and as yet, that’s not in evidence.)  More importantly, though, the party is interrupted by a mysterious mist, into which an upset Kamala charges to escape a teenage humiliation.  If you’ve been following the ‘Inhumanity’ storyline (and I can’t say as I blame you for not doing so, I lost track of it in the flood of product from Marvel every month), you know that the city of Attilan has crashed into Manhattan, and that the mist is, in fact, the Inhumans’ transmutative Terrigen Mist.  Kamala passes out on a street corner, and falls into a lovely, poetic dream of her favorite Avengers floating before her, speaking to her in Urdu, and resembling nothing so much as deities come to Earth to empower her.  It’s a lovely sequence, and once again, Alphona nails the landing with the art, giving Captain Marvel especially an otherworldly beauty.  As the issue ends, Kamala breaks out of a Terrigen cocoon to find herself strangely transformed…

…into a tall, blonde duplicate of Carol Danvers as Ms. Marvel.

THE BOTTOM LINE: ENJOYABLE AND INTRIGUING

There’s a lot going on in this book, and I have to say I liked it a lot.  Kamala comes across as likeably neurotic, with realistic worries about her body image, her heritage and her religion, and I have to second her love of “the old, politically incorrect” Ms. Marvel uniform with the thigh boots and the evening gloves.  There is an undercurrent that examines what it means to be Muslim, and a few quiet racist remarks here and there, but this issue does a good job of folding them into a greater story, which quiets any fears I might have had about this becoming an afterschool special story, or the main character a perfect straw woman with nothing interesting about her.  Most of all, the art throughout is truly special, feeling enough like a Marvel Comic to remind us where Kamala lives (Iron Man looks amazing, by the way) while different enough to deliver on the promise that this title will be something special.  In short, Ms. Marvel #1 hits a sweet spot, good art and skillful writing combining to make me want to read more about this character and her life, earning 4 out of 5 stars overall.