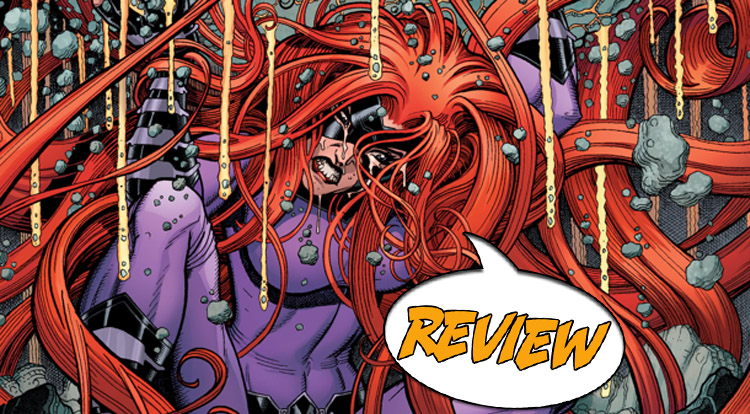 The Inhumans’ floating city has fallen, releasing Terrigen Mists across New York and seemingly far beyond.  With their king missing and their resources smashed into the middle of Manhattan, can the Inhumans rebuild?  Or is this the beginning of something even more unpredictable?

Bet on that second one.  Your Major Spoilers review of Inhumanity #2 awaits! Previously in Inhumanity:  The Inhumans used to live hidden in the mountains (though Stan Lee was never clear on WHICH mountains, to be sure), and then moved their city to a hidden corner of the moon.  But, in recent years, Black Bolt saw fit to return Attilan to Earth, hovering the floating city over the center of New York, reminding everyone that the Inhumans existed and weren’t going to hide away from the rest of the world any longer.  Someone didn’t like this idea, and chose to knock Attilan out of the sky, leaving the population of Inhumans scattered and disoriented, and spreading the transmutative Terrigen Mist across the world.  Now, the rebuilding begins…

HAVEN’T WE BEEN HERE BEFORE?

The story opens with a lovely sequence featuring Medusa, dreaming of a paradise suddenly invaded by death, a subtle and personal moment for one of Marvel’s oldest characters.  I really like the way Fraction has re-positioned Medusa as queen first, everything else later with his work on FF and in this series, but that moment is quickly dissipated as we turn to the sight of a devastated Manhattan, with the shattered remnants of Atillan scattered across it, and Medusa meets with Captain America regarding the rescue efforts.  When I review a comic, I try really hard not to fall back on the argument of “Seen it!”, a facile and meaningless arguments, but this story makes it hard.  Not so very long ago, the ‘Siege’ crossover dealt with what happened when the floating city of Asgard fell onto another city, a giant moment that eventually had little to no consequence at all on the greater scheme of things.  As we see The Avengers swinging into action to rebuild a destroyed city, it’s nearly impossible not to think about the near-destruction of Manhattan in ‘Fear Itself,’ or the one in ‘Secret Invasion’, or…  The introduction of Terrigen-mutated humans into the population is an interesting one, but one that is handled here in a manner very similar to the existing treatment of the mutants in the Marvel Universe (for reasons that many cynics have claimed should be obvious) while much of Medusa’s torment comes from her husband and king being missing, presumed dead, just as happened after Annihilation.  In short, many of the elements of the story being told have had a lot of use in recent years at Marvel, and are feeling a bit shopworn.

A MIXED BAG ON ART…

With the multiple hands in penciling and inking, there’s some inconsistency throughout the issue, but I’m actually quite impressed with how well the visuals hold together.  Much of the issue bears the unmistakable stamp of Todd Nauck’s strongly cartoon-influenced art, which makes the action sequences dynamic and powerful, but has the effect of undercutting some of the drama by limiting the amount of facial expression “acting” that the characters can do.  The choice to use a really bright palette of pastels and electric pinks & blues throughout the issue doesn’t make me happy, either, even though I understand that the creators were working to give the world of the Inhumans an ethereal, otherworldly feel.  With many of the usual players (Black Bolt, Crystal, Triton) out of play, a couple of new Inhumans get to show their stuff, including a nicely freaky seer with a transparent skull and a super-speed-type fellow, but there isn’t a lot of development given to them yet.  The issue ends with a moment that bookends the opening, but a strange transition to it makes for storytelling confusion, making it seem like the events of the issue could be a dream (even though I don’t think that’s the case.)  The introduction of Terrigen-supers as a new arms race has a lot of potential as a story point, but I’m finding it difficult to engage in the story’s big changes to the status quo because of my expectation that it won’t last…

I’m a fan of Fraction’s work, especially his close-quarters character moments, and this issue does very well with those, positioning Medusa at the forefront of the Inhumans (and, by extension, of the Marvel Universe) but the greater picture here is more troublesome.  I’m looking forward to seeing how the influx of Terrigenetic mutates affects the greater Marvel U, and wondering where things could go, but that excitement is tempered by remembering that much of this has happened before.  Marvel hasn’t commented on the rumors that the placement of the Inhumans is to offset the loss of X-Men movie rights to another company, but given how closely the parallel of mutant-to-Inhuman is being held, I suspect that there’s at least a grain of truth to the stories.  In short, Inhumanity #2 works better in its interpersonal moments than in the greater story, lacking a bit of scale, while the coloring works against the seriousness of the story, leaving this issue with a right-down-the-middle 2.5 out of 5 stars overall.  I’m just hoping that they don’t do as the solicits imply they will and bring a young team of Avengers into the future to mirror the ‘All-New X-Men’ storyline, because that would be one familiar element too many for me to take the book seriously…