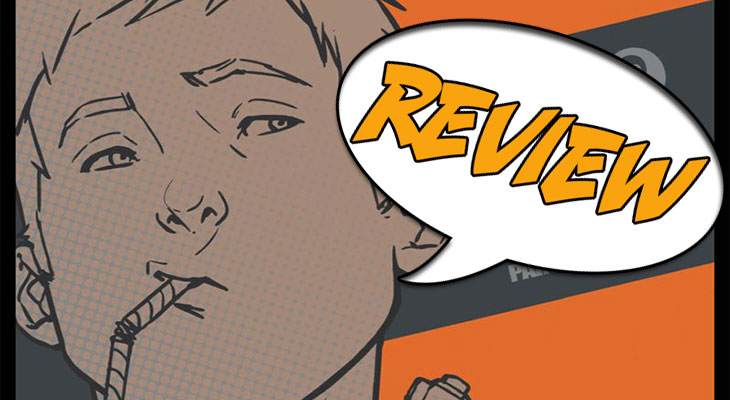 Kurt is a teenager. Life is hard. He wants to kill himself. When a beautiful young woman swoops into his life like a guardian angel and there’s a murderer on the loose he has no time for such self-indulgent constructs are death. I OPEN AT THE CLOSE

As with many great stories in the wake of Sunset Boulevard’s popularity, Fade Out: Painless Suicide begins with the final panels of the narrative. Similarly, Kurt is dying in water, although in a somewhat more dramatic twist, he’s bleeding out in a bathtub. But, let’s rewind and unfold how we got here. Beto Skubs (predominantly a Brazilian screenwriter), nails the angsty, self-indulgent voice of contemporary adolescence as Kurt sits on his toilet with his dubiously acquired gun and runs through dramatic songs in his mind in order to select the superb soundtrack to underscore his demise. There are two things that keep Kurt from offing himself in the first three pages – 1. There are no bullets in his gun 2. The barrel of the gun tastes bad. This sets the tone for the rest of Fade Out: Painless Suicide – darkly funny and, often, sweet. Whilst doing research for his boss (who, through extrapolation we learn works as an immigration lawyer), Kurt cuts his finger, bleeds with cartoonish profusion and faints; when he comes around a beautiful blonde girl named Andy is there to rescue him. Andy is everything that Kurt’s present girlfriend Tiffany is not. She is typically All-American stunning, sarcastic, unique and she listens to Kurt. Maybe life isn’t so bad after all? Then a wrench comes flying into the tires spokes of Kurt’s life when he learns that there is a serial killer operating once a year in town and targeting social workers. This is, of course, problematic because Kurt’s single (slutty – the writer’s word, not mine), mother is a social worker. A detective-family-friend blows off Kurt’s assertion and the teenager takes on the burden of tracking the killer himself. On top of dealing with the typical girlfriend drama that comes with falling for a new person.

Kurt goes through a few smaller revelations throughout the course of Fade Out: Painless Suicide until the killer is abruptly revealed in the final pages. I am electing to withhold the identity of the murderer Kurt is in pursuit of because Skubs made an interesting choice and I want you to experience that for yourself. The only issue I have with the narrative voice (which is to say: Kurt’s), is that when we see him away from the scene of attempted suicide he doesn’t behave in a way that reads as self-destructive or even mildly depressed. In fact, he is startlingly well-adjusted and seems possessed of healthy coping mechanisms – save having gotten his hands on a firearm. The book flows easily like an episode of television and the final panel manages to both tie up all the stray threads of the comic and at the same time open an interesting door for the reader to consider as they set the issue down.

GOING OUT OF MY HEAD

The people that live in Rafael de Latorre’s Fade Out: Painless Suicide look their age! That’s really neat! Kurt, Andy and Tiffany (the three pretty young things that waltz in and out of various angst-ridden situations), can all be slotted into stereotypical cliques, but it’s nice to see characters designs that could not be mistaken for whoever else has been drawn into the background of the party scene. The most striking artwork in Fade Out: Painless Suicide is not the initial attempted act or Kurt’s death as one may suspect, it is a quiet moment when Kurt and his girlfriend Tiffany are lying out on the roof of an anonymous skyscraper. As Tiffany rants on and on about how terminally unique she is and what a tragedy it is that nobody else can see that Kurt slips off to the soft place inside his mind. He tumbles, weightlessly, through the rainbow constructs of the building until he hurtles earthward amongst a flock of multi-coloured birds. This takes place over the length of a single page until an outraged Tiffany jerks Kurt back to reality.

Colourist Marcelo Maiolo deserves a special mention for the tonal shift between Kurt’s waking life and his dream world. Throughout the remainder of the book nothing is as beautiful as this single moment of introspection.

Assuming the framing device of suicide if not a trigger for you, this short graphic novel is worth picking up. Yes, the cover price stands at $4.99 (for some 50 pages), but think of it as supporting independent comics, hopefully that will take the sting out of it. Fade Out: Painless Suicide accurately portrays the voice of teenagers, it’s pretty to look at and may even manage to surprise you if you stick around to the end.