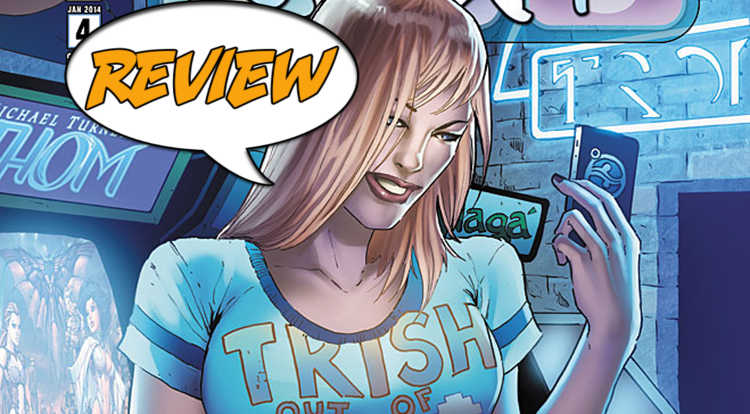 Trish Out of Water #4 Review

Trish learns that she is descended from a race of people called the Blue that live beneath the ocean waves. She’s told this multiple times. Everybody has a similar character design and somebody dies only to then be stuffed in a trunk. Previously In Trish Out Of Water: Trish is taken captive by an unknown Blue following an attack on the Shoreline Heights Police Department. However, a bigger shock was in store for the young teen as her presumed-dead father arrived to rescue her, giving her more questions than answers. Meanwhile, Steven and Bianca found themselves at the mercy of a similar group of Blue warriors. Yet, their fate was far less positive, as they were mercilessly tortured and killed, as their murderers sought the whereabouts of Trish …

Have you ever had a little kid give you the synopsis of their favourite movie? They rush (often shouting), through the major plot details and give you the bare minimum of information necessary for you to understand what is going on. This is what Vince Hernandez’s writing in Trish Out of Water #4 is like, without the added charm of having been produced by an actual child.

It speeds past as follows: Trish and her dad put on wetsuits and hop into the ocean where he proceeds to reveal the fact that they are essentially underwater mutants (à la Aquaman, rather than the Little Mermaid), and that she is likely the last of their dying civilization destined to save them all or perish trying. Then they swim a bit and that’s fine until they come upon a shiney city. Back on land, Trish’s astonishingly loyal group of friends discuss how hot she is before they run into one of the evil underwater men (referred to as the Blue), trying to kill everybody. They, astonishingly, manage to do away withh the warrior through the clever use of a sword and throw him into the trunk of their car. Back underwater Balindar (her parents’, who were king and queen we learn in a throwaway line of dialogue, guardian friend from the before time), informs Trish that she is the heiress to their dying civilization destined to save them all or perish trying. Does this seem familiar? In the final scene of Trish Under Water #4 it is revealed that the entire ruling class of Atlantis – sorry, Hereta – have all been killed by the uprising kingdom.

Hernandez’s dialogue is about on par with his plot for subtlety and originality. In spite of the presumable age difference of some 20 + years between Trish and her father they both speak like peers gossiping across the cafeteria table from each other even when discussing such important topics as: the suicide of Trish’s mother and the forthcoming battle to protect their world.

Giuseppe Cafaro draws the heck out of some pretty, pretty, pretty people. I’ll forgive that of comic book art, as a generalization, and I do find the sketchy lines left under the final inked images aesthetically pleasing, but I’ve a bone to pick with Mr. Cafaro nonetheless. As with the voices of both Trish and her father, their character designs make them look like a high school couple and not a father/daughter. It’s not even that Daddy-Trish is an attractive man of his age … he’s waltzed straight off the set of any CW show currently on the air.

Where Cafaro really excels is in the sweeping design and organic lines of the underwater city Hereta. It looks like an edifice that has sprung from a purely natural environment with no right angles to be seen. My sole critique of the epic-scale halls we see is that, for a civilization on the brink of disaster: it don’t look too rundown.

Comic books are often criticized for being too convoluted, but Trish Out of Water #4 (heck, the entire run to this point), could use some convolution. Even the art, its singular asset, is problematic and peppered with secondary characters that are damn near impossible to tell apart, and leaves me with no choice but to heartily recommend that you leave this book sitting on the rack where it belongs.