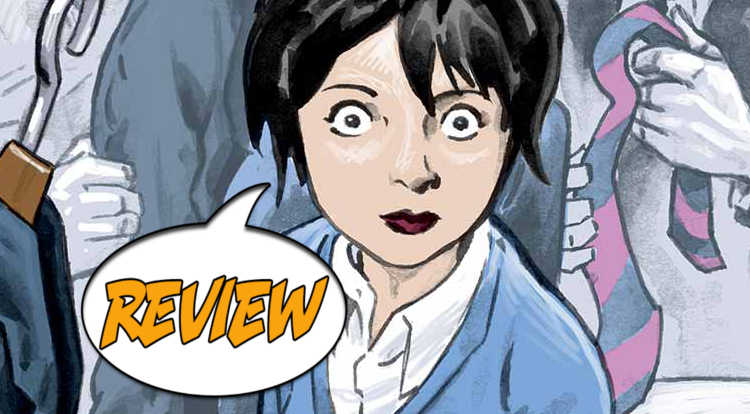 Edwin Paine and Charles Rowland think they’ve returned to St. Hilarions to protect Crystal Palace, but she may turn out to be the person helping them.

Previously in Dead Boy Detectives #1 – Schoolboy Terrors pt 1 of 4: Edwin Paine and Charles Rowland continue to cheat Death on this adventure across the United Kingdom. They witness an art-theft-cum-performance-art-piece that goes terribly, terribly wrong. In saving the life of Crystal Palace (a young girl and unfortunate off-spring of two eccentric performance artists), the Dead Boy Detectives are startled to learn that their efforts may have been all for naught. Crystal dies, for approximately a minute, but is permitted to wander on as mortal clay, although she remembers two peers from her snowy vision. On a whim she demands to attend St. Hillarions (a detail she recalls from the in between place), and her parents oblige with no real concern for their daughter. Edwin and Charles (the titular Dead Boy Detectives), know better and become Crystal’s impromptu guardians in her quest to unravel the mystery of who they are.

Dead Boy Detectives #2 brings us the world as Crystal knows it. Where issue #1 was told almost entirely from the perspective of Edwin Paine and Charles Rowland the second installment in this four issue arc near-exclusively stars Crystal. A quick peek around Crystal’s leisure activities reveals that, on top of coping with her outrageous and borderline negectful parents, she is a nerd! Hooray! A collection of manga peppers her shelves and we are introduced to the world of Yonda – an MMOPRG not unlike World of Warcraft – that our heroine loves more than anything. All of these and her attitude Crystal takes with her as she journeys to her first day at St. Hillarions. When these details are revealed to her embarrassingly Mean Girls-esque dormmates they bully Crystal in the single most contrived and cliché scene of the entire issue. It turns out, that in addition to Edwin and Charles the Friendly Ghosts there is another willing to watch Crystal’s back: her dormmate Hana Watanabe. Hana has previously been marked for doom by headmaster Theodore and his band of ghoulish buillies. It’s a sad move when we consider that Hana represents the sole person of colour in this entire series to date. Although Crystal is initially leery of Hana’s companionship, due to the sudden death of a childhood friend that we learn about through a flashback sequence, she gives in when it is revealed that Hana too plays Yonda.

Edwin and Charles have not been ertswhile languishing, they revisit the site of their respective demises and discover that their bones are not where they should be. Crystal unknowingly helps lay this mystery to rest by hacking (and I use that word generously), into St. Hilarions’ records and searching for EDWIN PAINE and CHARLES ROWLAND respectively. Dead Boy Detectives #2 draws to a close with Edwin and Charles sqwoosh-ing off to Charles’ grave where they are confronted with yet another question.

Although the conceit of Dead Boy Detectives seems to have been Edwin Paine and Charles Rowland helping Crystal Palace it is very fun to see Crystal being able to lay to rest (pun unintended), a small piece of the vast mystery that surrounds the latter part of their lives and their deaths. This issue is a lot of fun, though definitely more accessible to a reader familiar with Sandman and/or the original Dead Boy Detective series. Preferably both. It’s well paced, lively and it feels like Vertigo is building toward something big by the end of this arc. However, there was a lot of hype around Death’s appearance in this issue and, as it was a cameo at best, I ultimately found the aforementioned excitement unwarranted.

Mark Buckingham draws a sleek, lovely book. Gary Erskine and Andrew Pepoy keep the characters and St. Hilarions feeling whimsical and light, but the real joy to be found in the art of Dead Boy Detectives #2 is the colouring. Lee Loughridge is deserving of applause or gold stars or whatever else you have to offer him by way of kudos. This issue in particular skips around in time and place and each different location is given a different colour. It is as if you are watching each story through a different filture or lens. The farther back you go (say, to Charles Rowland’s death), the more grey seeps into the panel, the sinister memories from Crystal’s past (not yet a decade gone), are tinted in a less severe grey. Purple shades are implicit of sinister goings-on and the more yellow panels are safe daytime parts of the story. Even the video game world of Yonda, which we visit only briefly, is alive in a technicolour that is never touched again once Crystal, Edwin and Charles are inside St. Hilarions. Some readers might not be into such extreme shifts in colouring, but where in other places it can feel too much like leading, in Dead Boy Detectives it feels very thoughtful and precise.

COME OUT AND PLAY

If you know the world that is set up in Sandman and carried over into Dead Boy Detectives and you have even the remotest fondness for it, this issue is worth picking up. I should like to recommend it to all readers who are fans of supernatural elements in comic books or even mysteries, but without that baseline knowledge this issue may be a bit too mired in its own history. Edwin Paine and Charles Rowland are two characters I have been fond of for years and I love having them here again, I think Buckingham and Litt are building toward an exciting end to this arc and that the drama and revelations will continue to grow from issue to issue. It’s fun, it looks good and the parts that are silly are ultimately unoffensive. If you want to pick it up, I would suggest grabbing issue #1 first, though.