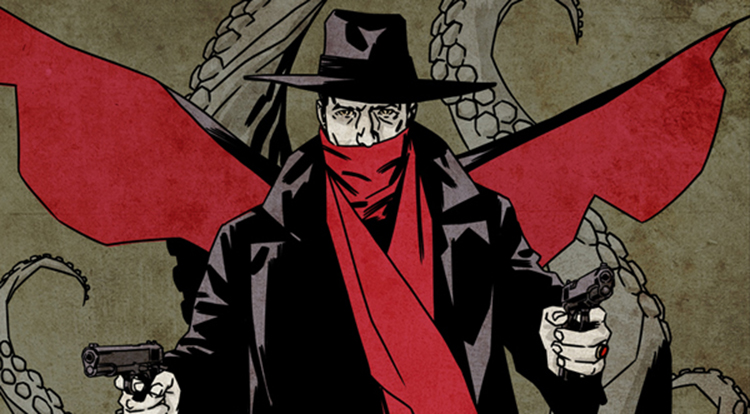 The Shadow over Innsmouth

Here’s some news that has me so giddy it took me nearly a day to calm down so I could tell you all about it.  Those who have followed Major Spoilers for years know that I love the lore crafted by H.P. Lovecraft, and that I also have a special place in my heart for the pulp hero, The Shadow.  It looks like Dynamite Entertainment is trying to woo me even more by getting me my 2014 Christmas present early as The Shadow heads to one of Lovecraft’s strangest towns – Innsmouth.

In The Shadow Over Innsmouth, the fog-shrouded town of Innsmouth holds deep secrets. There are legends of inhuman creatures raised from the depths, of supernatural rites and elder gods from beyond. When Lamont Cranston and Margo Lane find themselves trapped in Innsmouth, terrible truths will surface… truths only the Shadow can know.

“Certainly the title alone made this a natural story to tell, but more than that, both the Shadow and Lovecraft’s mythos are products of the same era,” said writer Ron Marz in a prepared press release. “They both have pulp roots, so despite the Shadow’s crime orientation and Lovecraft’s overt horror, there’s a similarity in mood. I tried to put together the Shadow and the Innsmouth legend in a way that remains true to both of them. And obviously I couldn’t ask for a better artist collaborator that my buddy Matthew Dow Smith. If anybody in comics knows shadows, it’s Matthew.” The Shadow Over Innsmouth one-shot arrives in April 2014, and I can’t wait!