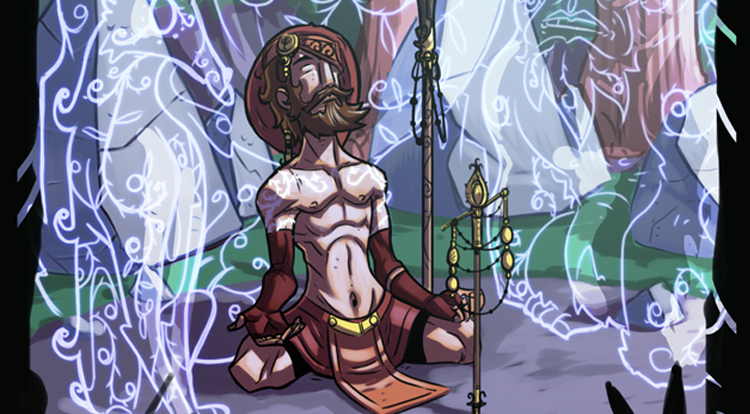 The Major Druidic Orders have existed since time immemorial and may, in fact, be the oldest mortal organizations. The differences between the orders are philosophical, rather than, say, geographical or cultural and inter-order arguments can become quite heated. That said, all members of the orders recognize that their goal is the same, to protect spirits and non-spirits from each other.

What follows is a quick overview of each organization; Their philosophies, practices and spirit associations, as well as the opinions of their detractors.

Sleepers at The Tree of Stories

“Honor the Spirits, Gather Their Wisdom”
Philosophy: The Sleepers believe that Spirits exist to teach creatures of flesh. Whether it’s a monstrous echo to teach humility or a screeching whisp to teach patience, The Sleepers at The Tree of Stories believe that there is a lesson hidden in each spirit. As such they constantly analyze their interactions with spirits, trying to distill the hidden lesson.
Practice: The Sleepers keep a lot of lore, and as such are often used by the other orders as a resource. The majority of primal rituals in use today were pioneered by the Sleepers. That said, a sleeper is as likely to keep a newly derived mystical ritual as he is a transcript of an entirely trite conversation with a rock spirit.
Their focus on lore and learning has earned the Sleepers a reputation as being much less aggressive than the other orders, but a significant threat will move any Sleeper to action.
Detractors: Although other orders recognize that spirits have a lot to teach, most see the Sleeper’s dogma as excessive. Not every interaction with a spirit is meant to be meaningful, they say.
Prominent Members:
As a druid and priest of Melora, Glaa was well regarded in both organizations. He is presumed dead.
Gerde Coldkeep is known both as a powerful warden and as the foremost authority on underground spirits. She is often called upon by her dwarven brethren when new major mineral veins are discovered.
Seasonal Patron: Fox (Winter Mantle)
Heralds: Vole, Moth, Vulture, Sardine
Boons: Elm, Bat
Debts: Pine, Puma, Boar
Embodiment: The Ver-Vikk is an enormous wooden centipede.

Keepers of the Fiery Garden “Preserve the Mystic Places”
Philosophy: The Keepers believe that Spirits and their behavior can be used to gauge the health of the world. As such they devote themselves to preserving the hidden glens and mystical places that are sacred to natural spirits. Should creatures of flesh pose a threat to these places, however, the Keepers will defend them zealously.
Practice: The Keepers of the Fiery Garden spend their days mapping and cataloguing places of spiritual power, as such they spend a lot of time dealing with Spirits and very little dealing with people. This has advantages and disadvantages, often making them authorities in dealing with spirits but unable to communicate that knowledge to mundane people effectively. Of course, should any sort of populace or group attempt to despoil a mystical node, and fail to listen to a Keeper’s warning, the Keepers will not hesitate in destroying the intruders.
Detractors: Other orders point at the Keepers as what happens when a Bright One drifts too far into the direction of the spirit world. They are often accused of making irrational decisions to protect even minor spirit interests.
Prominent Members:
Woogan Maplethorp is not just unusual for being a gnomish druid, but also for his focus on sub-surface aquatic spirit glens.
Obsidian Lark is a name whispered throughout the central continent when people die mysteriously. This Keeper is particularly quick to action, often leaving a trail of arrow-riddled corpses as a warning to trespassers.
Seasonal Patron: Eagle (Summer Mantle)
Heralds: Sparrow, Rabbit, Flying Fish
Boons: Turtle, Pine, Tiger, Fox
Debts: Bat, Granite
Embodiment: The Dnelveg is a headless humanoid creature with six arms, covered in iridescent blue feathers.

“Maintain the Balance Between Spirit and Flesh.”
Philosophy: The Dancers believe that spirits and creatures of flesh have the same right to exist and express their natures. This order spends a lot of time dealing with spirits that cause problems for people, but also with people that cause problems for spirits. They take it upon themselves to preserve the delicate balance between progress and safeguarding the spirit world.
Practice: Dancers in Twilight travel regularly and consult with spirits through their travels attempting to gauge whether human (or elven, or dwarven) settlements are causing problems for them. Normally, if such a problem exists the Dancers will try to find a peaceful solution. If one is not found there may be reprisals for either side. They are not above destroying a renegade spirit or, say, violently shutting down a mining operation to prevent a potential problem.
Detractors: Other orders argue that the Dancers enjoy their self-appointed task a little too much, harming both sides for the sake of “balance”.
Prominent Members:
Thundering Stag acted as high priest of Melora during the celestial crusade. His current whereabouts are unknown.
Val Din-Zal, The Bloodrose is wanted in the Sage Coast for wiping out a whole ranger unit from the Forestry Garrison. The Council on Forestry and Agriculture is conducting the investigation.
Seasonal Patron: Falcon (Spring Mantle)
Heralds: Goose, Kestrel, Trout
Boons: Snow, Orb Weaver, Kingfisher
Debts: Oak, Puma
Embodiment: The Lhendlegan is a Bear’s head surrounded by fiery axes.

Reapers of the Shining Harvest

“Guide the spirits to help the world”
Philosophy: The Reapers believe that spirits exist as a means for the natural world to communicate with its inhabitants. Thus, forging a relationship between sentient creatures and the spirit world is in everyone’s best interest. This order uses spirit magic to benefit societies, obviously not every society is amenable to the idea, but those that allow the Reapers of the Shining Harvest to help them often see great benefits.
Practice: The Reapers spend a lot of time traveling to populated areas teaching the local populace how to best coax their local spirits to improve harvests and otherwise improve their everyday lives. They are also the most active hunters of renegade or dangerous spirits.
Detractors: Other orders argue that the Reapers are only using spirits as a tool to help others. They argue that putting worldly concerns above the welfare of the spirits is a dangerous path. Often the Reapers will resort to destroying a problematic spirit rather than risk harm to a sentient population, their detractors hold that they don’t exhaust all other potential avenues first.
Prominent Members:
Zarelyl, an elven shaman, has a complicated relationship with the Du Liens of Diamond Throne. If all records are considered they owe him more than ten thousand gold in consulting fees, and also have an outstanding twenty thousand gold bounty for him to be captured alive.
Silken Crane, an up-and-coming barbarian, is rapidly building a reputation as a spirit-slayer as corrupted spirit activity spikes in the Seven Clans Total Control Area.
Seasonal Patron: Ox (Autumn Mantle)
Heralds: Fox, Sparrow, Cockroach, Koi
Boons: Raven, Oak, Boar
Debts: Condor, Turtle
Embodiment: The Klaurhunn is a mastiff-like black dog with eagle’s wings.

Despite their differences all four organizations have several things in common. Perhaps most obviously, their members are given a huge amount of freedom. Some spend all their time in spirit matters, while others serve as advisors, guides and even mercenaries. The one position that the orders actively discourage is that of ruler, although history has seen some druid-kings, they are by no means common.
Members of the orders usually don’t introduce themselves as such, in fact the majority of the populace of the central continent has no idea that there are different orders of spirit-speakers. The one exception is The Seven Clans total control area, and even there, most people couldn’t reliably explain the differences between them.

Hope you enjoyed this look at the world of Critical Hit, art for this article was provided by the always impressive Alexander Diochon. And remember: there’s more to explore in the Critical Hit World Building Archive.