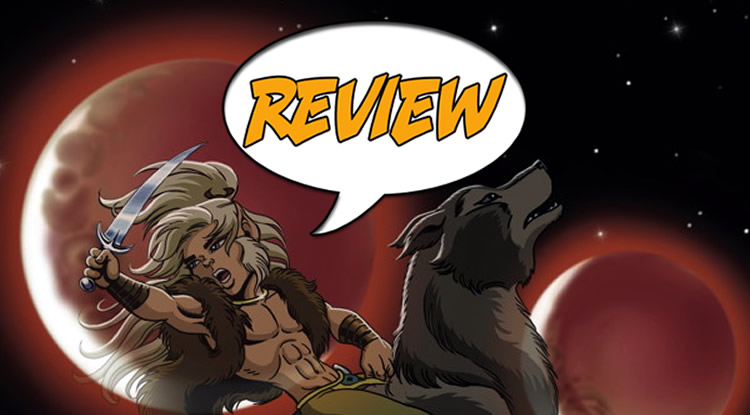 In an industry that expects readers to turn over every five or six years, some books are simply so good they resonate with generation after generation of comics fans.

This week, ElfQuest is back, and I expect it to gain a whole new legion of fans as it races on to the end of an era.

Previously in ELFQUEST: “The Wolfriders’ chief, Cutter, knows that change is coming. His tribe’s proximity to the Palace of the High Ones, a mysterious and magical oasis, makes this inevitable. As Cutter’s daughter Ember, chief of her own tribe, shares her father’s efforts to preserve the old ways amongst their kin, the human tyrant, Angrif Djun, ascends the mountain her clan call home and rocks the foundation of their peaceful existence.”

ElfQuest is a comic book that was created by Wendy and Richard Pini back in 1978. It focuses on a community of elves and other fictional species who struggle to survive and coexist on a primitive Earth-like planet with two moons.

The first ElfQuest story was published in the underground comic Fantasy Quarterly, published by IPS (Independent Publishers Syndicate), which folded after publishing the first issue of ElfQuest. (Between ElfQuest’s “Fire and Flight” parts one and two was a brief story written by T. Casey Brennan and illustrated by future Cerebus the Aardvark creator Dave Sim titled “Doorway to the Gods.”) The quality of the publication terribly disappointed Wendy and Richard Pini.

Since then, the Pinis have always struggled to have their stories told in the best format possible, which has included several full-color volumes on glossy paper. I personally own all four of those editions, thankfully. Over the years ElfQuest has been self-published by the Pinis, then moved to Marvel Comics, then back to the Pinis again through their own company Warp Graphics, followed by stints at DC Comics and now Dark Horse.

What makes ElfQuest stand out from other books is its ability to make these fantasy characters “real” in the sense that they make mistakes as well as experience victories. Not only that, but Wendy Pini’s art often literally jumps off the page, a combination that has turned the series into a classic.

In the book, none of the elves age at the same rate as humans. They have much more variation in character than the humans do, who often are among the villains of the book.

One thing that stands out is that time does pass in ElfQuest, unlike many other comics in which someone seems to perpetually remain a specific age regardless of how many years the comic has gone on. This is another way in which the comic maintains a “real” feel to it because there’s a progression to the lives of its characters.

WHO ARE THESE CHARACTERS?

There are three main elves the story centers around. The first is Cutter (soulname: Tam who carries a blade), the white-haired chief of the Wolfriders, a clan that lives in the forest and, as their name suggests, enjoys such a close relationship with their wolf companions that they often ride on their backs. In early stories, we watched Cutter rise up to rule the Wolfriders, and he has proven to be a wise leader.

His mate is Leetah, a dark-skinned healer of the Sun Folk tribe who often repairs any wounds or injuries the various Wolfriders suffer. We got to see the pair meet and grow together also in early issues.

The third character is Skywise (soulname: Fahr), the soul brother of Cutter and considered a member of his family. He’s a lover of the stars and the ladies.

One more female to be aware of is Ember, daughter of Cutter and Leetah. She has her own tribe now, and a good portion of the story deals with her.

Another fun element is the naming of some characters. For instance, Bearclaw, Cutter’s father, is the son of Mantricker and Thornflower. Other names I like include Dewshine, Ember, Goodtree, One-Eye and Strongbow.

WHAT’S GOING ON IN THE NEW SERIES?

Things have gone well for the Wolfriders, so they don’t need to search for food as often as they had to the past. Finally, the tribe decides that some of the group will go on a hunt, and Cutter feels there’s change coming. (I fear that means he’s coming to the end of his life, but I hope I’m wrong!) We also see Ember encounter a human well known by the elves, and they discover they have good reason to be suspicious of him!

A few months back, Dark Horse released a prequel special to this ongoing comic. If you can’t access the older stories, the prequel would help new readers or those wanting to refresh their memories out quite a bit.

Wendy Pini’s art is as strong as it ever was, and we feel for the characters as they move forward in time and in their individual lives. The scripting augments the beautiful art so very well!

If you’re looking for some engaging fantasy, don’t miss Elfquest: The Final Quest! It’s something special and will pull you in from the first time you read it!