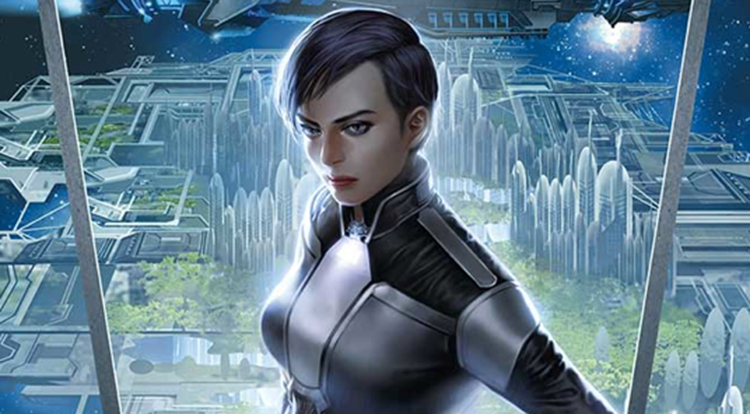 TALES OF HONOR #1 lands this March, kicking off the first of many immersive science-fiction comics, games, webisodes, and TV episodes, leading up to the release in 2017 of a feature film. Based on the USA Today and New York Times bestselling science-fiction novels, Honor Harrington, by David Weber, the stories are set 2,000 years in the future when hyperspace travel has allowed humanity to colonize the far reaches of the universe. TALES OF HONOR follows the life and times of a brilliant, genetically engineered female spaceship captain, Honor Harrington, as she heroically leads her crew through a series of epic political, military, and personal adventures.

“We chose the comic platform to launch the Honorverse to the uninitiated because it emphasizes visual storytelling and introduces our characters in a strong, iconic way. Comics also offer us the opportunity to interact with audience on a monthly basis to find the right tone and style for this new incarnation of Honor Harrington and her world,” said Scott Kroopf, Chief Creative Officer, Evergreen Studios.

The first comic series introduces Honor on the eve of her execution. From her cell, she recalls her first command assignment in a hellish backwater star system, where she discovers an enemy fleet massing for a sneak attack and must find a way to stop them with her lone ship.

“Weber’s story world is so cool because it’s based in real science, which gives it a feeling of authenticity. TALES OF HONOR is to Science Fiction what JASON BOURNE is to spy movies: realistic, gritty, and action-packed,” said Scott Kroopf, Chief Creative Officer, Evergreen Studios.

Matt Hawkins from Top Cow agrees. “I have never taken on outside comic projects, but when Evergreen approached me and I read the books, I was truly intrigued. David Weber has a level of detail that is not given in a lot of stuff now. The way they do the spaceship combat is actually realistic. The idea that the ships are so far apart and have to deal with inertia is something you don’t see in Star Trek or Star Wars. You can’t just turn a ship on a dime that’s going that fast.”

“What impressed me about THINK TANK was how clever and scientifically grounded it was, which made it very accessible and believable. Matt studied science and grew up in a military family, which made him the perfect person to adapt this story as a comic,” said Scott Kroopf, Chief Creative Officer, Evergreen Studios.

Evergreen Studios, the company behind WALKING WITH DINOSAURS, currently in theatres, develops stories whose characters, plots, and ideas can unfold over multiple platforms.

The mobile game, Tales of Honor: The Secret Fleet, will be available on iOS and Android and releases shortly after the first comic. This free-to-play strategy game will allow people to battle a multitude of enemies in ship to ship combat across the breadth of the “Honorverse”.

David Weber wrote 28 Honor Harrington novels, including an anthology series, two spin-off series, and a recent young adult series. The most recent entry in the series, Beginnings, was released July 2013.