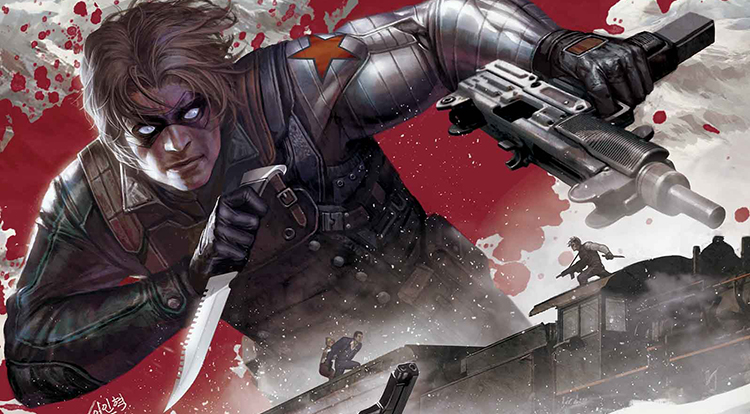 With the new Captain America movie just around the corner, Marvel has a new Winter Soldier book arriving in February.  Written by Rick Remender with art by Roland Boschi, Winter Soldier: The Bitter March #1 that features Bucky Barnes in a Cold War adventure.

WINTER SOLDIER: THE BITTER MARCH #1 (of 5) (DEC130640)
Written by RICK REMENDER
Art by ROLAND BOSCHI
Cover by ANDREW ROBINSON
Variant Cover by IN-HYUK LEE
Animal Variant by CHRIS ELIOPOULOS
At the height of the Cold War, S.H.I.E.L.D. sends their top operative, agent Ran Shen, deep into enemy territory to retrieve two Nazi scientists that could be the key to winning the war. But they aren’t the only ones who want these high value scientists. The Soviet Union have unleashed their most ruthless agent – THE WINTER SOLDIER! His mission: acquire the scientists by any means necessary – or kill them before they fall into enemy hands!