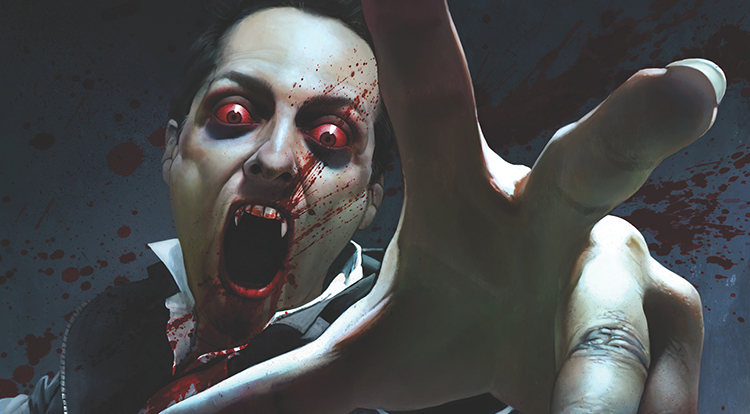 Hot off the success of the shared-world vampire prose anthology, V-Wars, IDW and New York Times best-selling and multiple Bram Stoker award-winning horror author, Jonathan Maberry conspire once again to continue the battle that rages between humans and vampires in the all-new ongoing comic book series coming this May. V-Wars is set in a world transformed by a global pandemic caused by a millennial-old virus that, once triggered, affects individuals differently depending on their DNA. The result is vampires as unique as their cultures and a response from those unaffected humans like never seen before.

“The vampires people used to believe in weren’t charming romantic antiheroes. They were monsters,” says writer Maberry. “Each culture had their own legends, and each of these vampires was completely different from the others; and all of them were different from the vampires in pop-culture. We went directly to the source: the myths and legends of vampires around the world and throughout history. Old-school, scary, and complicated.”

The ongoing V-Wars series will kick off in May on Free Comic Book Day 2014 with the first two issues of V-Wars. V-Wars #0 will be available for free at participating comic book retailers and introduces a world caught in the early throes of the fast spreading Vampire Wars as seen through the eyes of a folklore scholar, Luther Swann. It boasts a cover by the incomparable Kevin Eastman (Teenage Mutant Ninja Turtles) and is not to be missed. V-Wars #1 will be available the same day for standard price and highlights an event that takes the Vampire Wars to fever pitch and makes it bloodier than ever.

V-Wars will make the leap to comics with the help of artist Alan Robinson (Mars Attacks, KISS: Solo) and colorist Jay Fotos (Locke & Key). Together they flesh out this world in a vivid and frightening way. IDW re-invented the vampire genre once before with 30 Days of Night…and we are doing it again with V-Wars! The future of vampires is here!