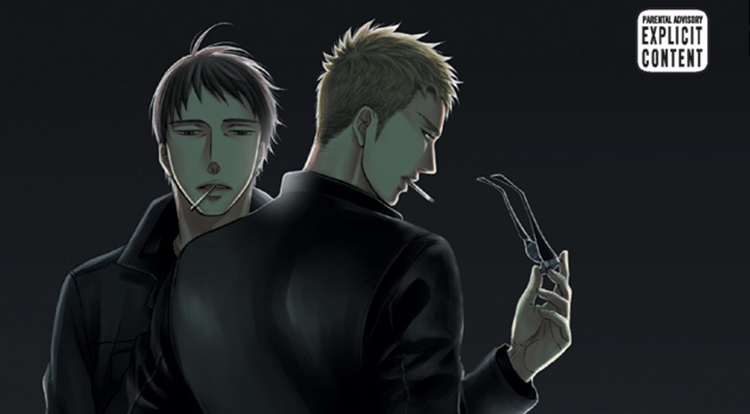 NIGHTS is rated ‘M’ for Mature Readers and carries a print MSRP of $12.99 U.S. / $14.99 CAN. A digital version is also available for an MSRP of USD $5.99 and offers readers two methods of digital access to the volume on www.SuBLimeManga.com – a DRM-free downloadable PDF that is viewable on any enabled eReader device and computer, and via the online manga viewer found on the web site. A free online preview is also available on the SuBLime website.

NIGHTS is a collection of masterful, sensual stories by one of Japan’s most popular yaoi creators! In the title piece, Masato Karashima is a “transporter,” a man paid to smuggle anything from guns to drugs to people. When he’s hired by yakuza gang member Masaki Hozumi, he finds himself attracted to the older man, and what starts out as a business transaction quickly spirals into a cat-and-mouse game of lust and deception. In “Emotion Spectrum,” a high-school student tries to be a good wingman for a classmate, with an unexpected result, while “Reply” is told from the alternating perspectives of an emotionally reserved salesman and the shy mechanic who’s in love with him.

“Kou Yoneda is one of the yaoi genre’s most acclaimed creators and we are very excited to release NIGHTS, her first new work since 2011,” says Jennifer LeBlanc, Editor, SuBLime. “Her latest title contains six exquisitely drawn romantic tales that feature a handsome cast of extremely sexy men, and also includes special bonus content and additional full-color pages created especially for this edition. We invite global yaoi fans to dive into the passion that happens once the sun goes down in this hot new release available now!” Kou Yoneda made her manga debut in 2009 with No Touching at All, also available in English, which became an instant critical and commercial success. She followed up with A Singing Bird Can’t Fly and has also published a variety of doujinshi (independent comics) under the circle names “Raw” and “NITRO Koutetsu.”

About SuBLime
SuBLime is a global yaoi/boys’ love manga publisher, and is a partnership between VIZ Media, LLC (VIZ Media), the largest distributor and licensor of anime and manga in North America, and Japan’s Animate, Ltd. (Animate). This bold, global publishing initiative will present English-speaking fans everywhere with a broad selection of high quality titles. SuBLime will offer titles digitally worldwide available at www.SuBLimeManga.com, with many available in Download-to-Own format, and selections in print also available in English-language editions worldwide.