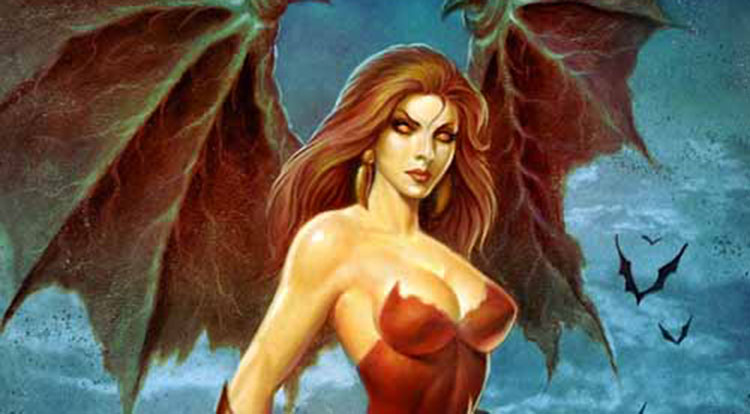 In the pages of Heroic Spotlight #13, there are two special treats in store for fans of Heroic Publishing’s universe of heroic costumed adventurers.

First, secrets of the demonic HARPYRA are revealed in a twenty-page origin story by her creator, writer/artist PAUL ABRAMS, with some help from co-writer and inker GARRY BARNES.

Heroic Spotlight #13 is now on sale, and can be ordered directly from Heroic Publishing through the company website at www.heroicmultiverse.com.

The demonic HARPYRA first appeared in the fifth and sixth issues of THE TIGRESS, as an antagonist for Heroic’s savage cat goddess. Most recently, she reappeared in CHAMPIONS #57 and #59. In Heroic Spotlight #13, in her very first solo-starring adventure, the secrets of her origin are at last revealed. As we learn in Heroic Spotlight #13, Harpyra is in fact an exiled princess of Hell. As explained in Paul Abrams’s origin story, Harpryra was summoned to the mortal realm by the Tigress’s arch-enemy, the sinister SERRPENT, ostensibly to assist him in his grand plan to enhance the power of Death. By the Serpent’s design, Harpyra inhabits the body of a beautiful young woman named Diana, an investigative reporter who died during the course of a battle between the Serpent and the Tigress, and was raised from the dead by the Serpent specifically to serve as Harpyra’s host.

But even though Harpyra is bound by the magic that summoned her to serve the will of the Serpent, she still has her own agenda. She considers the mortal realm ripe for the taking, and fully intends to find a way to accomplish that for herself.

This puts Harpyra at odds with the mysterious DEMONA, the hellspawned princess who arranged for Harpyra’s exile in the first place, an evil creature who has her own designs on the mortal realm. Although Demona is as yet unable to bypass dimensional barriers and come to the mortal realm herself, she has her own agents to call on, agents such as the minotaur named CALIBAN.

As the story of Harpyra unfolds in future issues of Heroic Spotlight, and perhaps eventually in her own magazine, writer/artist/creator Paul Abrams will be exploring the conflicts between life and death, good and evil, liberty and control, dependence and self-reliance.

And where Harpyra appears, can the savage Tigress be far behind?

The other character who appears in Heroic Spotlight #13 is the fabulous FANTASTIC GIRL! It’s just a little three-page teaser to set the stage for Fantastic Girl stories that are currently scheduled to appear in issues #15 and #17 of Heroic Spotlight, but even at only three pages it serves to put this wonderful new character front and center in Heroic Publishing’s universe of comic book superheroes, as she takes on the BLUE CREW in order to foil a museum heist.

The Fantastic Girl has in fact appeared previously in issues of Heroic Publishing’s most popular title, FLARE, and has a direct connection with Flare’s police officer boyfriend, Lucas Madison. But the exact nature of that connection, although hinted at in the story that will appear in Heroic Spotlight #15, won’t be fully revealed until the release of Heroic Spotlight #17 later this summer.

For now, suffice it to say that the Fantastic Girl is not exactly what she appears to be. In the Fantastic Girl, magic and mythology combine to create a brand-new heroine with an extremely strong moral center, a heroine who derives her powers from the light of the moon, a heroine who fully intends to take on and expose the truth behind the machinations of MISTER JUPITER, San Francisco’s newest lord of crime.

Heroic Publishing’s comic book titles are distributed exclusively by Heroic Distribution’s online web service. Retailers interested in carrying this and other Heroic Publishing titles should register for a free retail account at www.heroicmultiverse.com/heroicdist