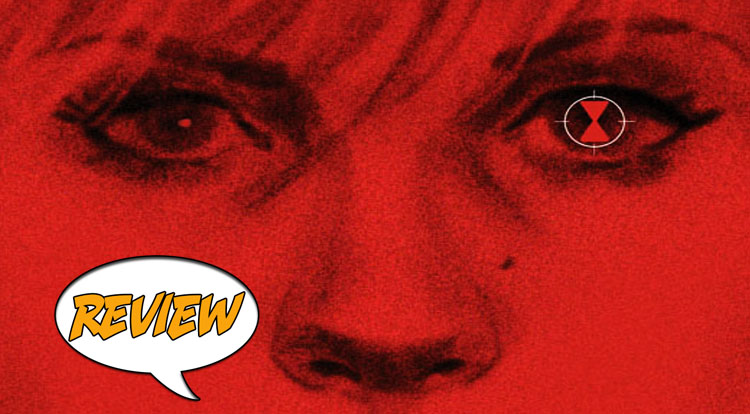 A former spy for the Soviet Union, a former assassin with mysteries hidden in side her secrets, the Black Widow is perhaps the most unlikely Avenger of all.  But what drives her to do what she does?  Your Major Spoilers review of Black Widow #1 awaits! Previously in Black Widow: Natalia Romanova was raised in the former Soviet Union, The Black Widow defected to the United States for the love of the Avenger, Hawkeye.  After adopting her signature black leather jumpsuit, she became a superhero, a Champion of Los Angeles, and eventually an Avenger, even leading the team during the 1990s.  Her past, however, has repeatedly come back to haunt her, containing as it does long runs in espionage, and even work as an assassin.  Now, she works with the Avengers to combat threats large, while on her own time, she works to overcome the sins of her own past…

SHE HUNTS THE DEADLIEST GAME.

We open with a very strong sequence, as a desperate looking man with a gun and a bomb has a conversation through a door with an unknown person.  They discuss how neither of them are good people, with the unseen character revealing how she murdered her own parents, became involved in crime circles, eventually becoming a killer for hire.  She reminds him that they’re both Russian, and offers to get him out of his predicament.  He agrees, only to have her cuff him and turn him in to the authorities.  As the man shouts that he’ll tell everyone her story and bring his criminal employers down on her head, she smiles and reveals that it was all a lie.  “No one will ever know my full story,” says the Black Widow as she drops him to the police waiting in the street below.  I’m torn on this, as the approach is a strong one, and the whole sequence is fun, up until the point where it turns out to be a story she’s making up.  We follow the Black Widow, finding out that she has been taking black ops jobs for money, which she then funnels into her own “trusts,” to atone for the unspeakable things she’s done in her past.  Edmondson does an admirable job of putting Black Widow in an interesting situation, and even starts building her a supporting cast (or at least an accountant and a kitty), but there are a LOT of familiar elements in play in this issue.  We don’t really get a handle on the Black Widow’s voice, while the “mystery man” type plots remind me an awful lot of 80s issues of The Punisher, the ones in which we see how Frank Castle builds and maintains the infrastructure of his war on crime.

Phil Noto is one of those artists that I really enjoy in certain situations, while finding him off-putting in others.  This issue slides back and forth between those poles, never quite making me love the presentation, but never making me want to stop reading either.  His ethereal version of Black Widow’s mane of red hair is pretty awesome, and as she takes another mission, Noto busts out all the stops with an action sequence.  As Black Widow fights her way through an army of mooks, I worry about the precedent of an Avenger becoming a killer for hire.  Luckily, Edmondson side-steps with a lovely plot twist, ending the issue with our hero at home, remarking on all the unspoken things she has to atone for.  It feels very much similar to Fraction and Aja’s take on Hawkeye, with the main difference being that we still don’t know what those things are, and as the book ends, Natasha states in dialogue what could be the issue’s greatest problem: “You’ll never know who I was before.”  Though we get the traditional first-person tough-gal narration, we don’t really get inside Black Widow’s head, which makes the whole story feel somehow remote.  The problem is exacerbated by having the main character explain a back story that isn’t true, leaving me as a reader feeling alienated by the main character of the story.

THE BOTTOM LINE: HAS POTENTIAL, BUT FEELS FAMILIAR.

Of course, this is only the first issue, and any and all of my complaints could be taken care of in an issue or three, so I’m inclined to give this book a little bit of leeway (especially given that I love the character, Scarlett Johansson and the idea of solo female comic book stories), especially given that the parts that don’t quite work are still skillfully done.  All in all, Black Widow #1 comes out of the gate pretty strong, even with an idiosyncratic art style and some familiarity to the lone-assassin-tough-character tropes, delivering an interesting start to Natasha’s renewed solo career and earning 3.5 out of 5 stars overall.  I’m willing to give this one at least four issues to get its feet underneath it, based on the strengths of this issue…