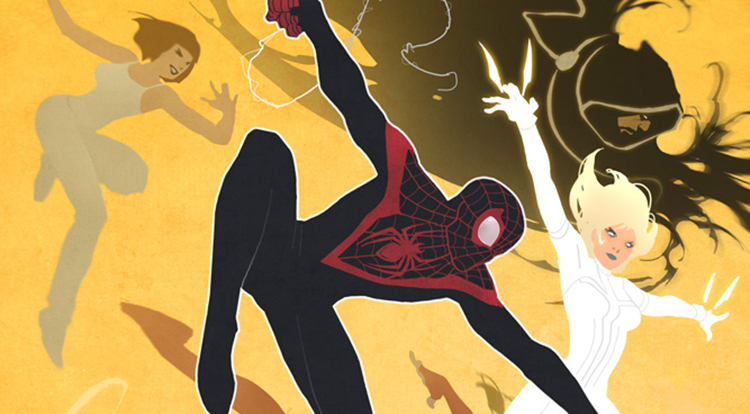 It looks like Marvel isn’t ready to let go of the Ultimate Universe just yet – even though Galactus and his appetite made it look like it was all over. Marvel has announced it will rebrand the Ultimate Universe to Ultimate Marvel NOW! beginning in April, and will launch three titles that pick up where Cataclysm left off.

It all starts in April with ALL-NEW ULTIMATES, from the creative team of Michel Fiffe (Copra) and Amilcar Pinna (X-Men: First Class). Spider-Man, Black Widow (formally Spider-Woman), Kitty Pryde, Bombshell, Cloak & Dagger officially unite to tackle the vicious, rampant crime wave overtaking Hell’s Kitchen! But can this new team of Ultimates stand up to the murderous gang known only as the Serpent Skulls?

Ultimate Marvel NOW! continues through the spring of 2014 with the launch of ULTIMATE FF by Joshua Hale Fialkov (Cataclysm: Ultimate X-Men) and upcoming superstar artist, Mario Guevara. The FF – Future Foundation – is all that stands between the Ultimate universe and COMPLETE AND UTTER DOOM! Can Sue Storm, Tony Stark, Machine Man and Sam Wilson face the oncoming devastation directly after the events of Cataclysm?

And finally, Miles Morales is back in his own web-slinging solo-series, MILES MORALES: ULTIMATE SPIDER-MAN by creator Brian Michael Bendis (Ultimate Spider-Man, All-New X-Men) and artist Dave Marquez (Cataclysm: Ultimate Comics Spider-Man, All-New X-Men). In the wake of earth-shattering events, Miles is back in action with a new status quo and a new outlook on life! But there is no time to sit back and relax. A BIG villain from Peter Parker’s past is alive and well and about to turn New York upside down. Though it looks like Marvel is rebooting the universe with updates to characters and teams, personally, it might have been better (and more interesting) to blend the two universes together in 2014. The biggest argument against that is in Fiffe’s statement above – the Ultimate Universe (Ultimate Marvel NOW! Universe or UMNU as we’ll probably refer to from now on) is still young, and when it launched over a decade ago, it was really the driving force behind Marvel’s turn around and ability to attract new, younger readers. If UMNU can do it again going forward,then 2014 could see another jump in demand for comics.