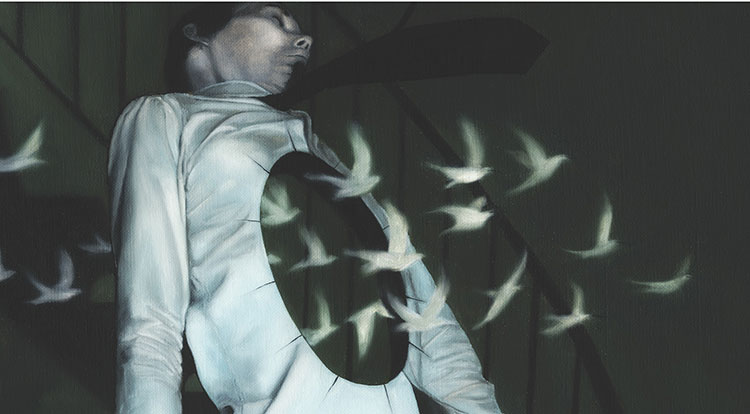 The libretto refers to the part of an opera or a musical that is the words or lyrics, and is distinct from the music. 44FLOOD’s LIBRETTO will be the “text” to the “music” that is a central theme, starting with LIBRETTO Volume 1: Vampirism coming this April.
LIBRETTO Volume 1 is curated/edited by Kasra Ghanbari and has the theme vampirism, being the misuse of power, as well as the objectification and exploitation of others. Featured contributors give their unique perspectives on this theme, with many sections including an interview of the contributor conducted by another artist.

“We’re excited to have LIBRETTO launch our partnership with IDW,” said Kasra Ghanbari, CEO of 44FLOOD. “LIBRETTO has both narrative and symbolic works, comic book panels and gallery paintings, alchemical approaches and comedy. It celebrates the ability of art to affect the way we consider and see the world.”

This 200-page softcover will feature contributors that include Ben Templesmith, David Stoupakis, Riley Rossmo, Christopher Mitten, George Pratt, menton3, and many, many more. Several of the artists also give a rare look at the techniques and processes they used to create pieces for the book. This is your rare opportunity to explore the dark world of vampirism as seen in an artist’s mind. 44FLOOD is an artist collective and publisher formed by Kasra Ghanbari, Ben Templesmith, and menton3. More information may be found at http://www.44FLOOD.com.