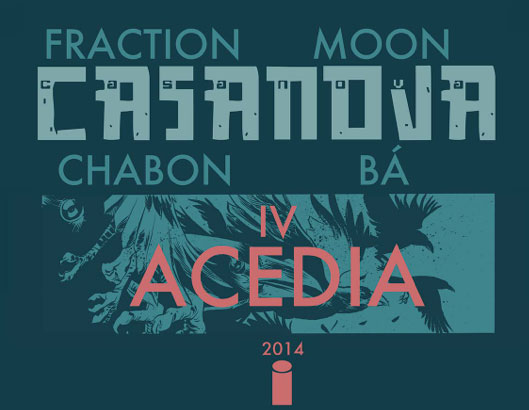 Casanova escaped the complicated and stressful life of a dimension-hopping, identity-shifting, sexually voracious killing machine and we last saw him wandering out of the wreckage of a UFO that landed in the Hollywood Hills.

It’s our Los Angeles. It’s our Earth. And he remembers absolutely nothing of his past.

“There has literally never been a better jumping-on point for new readers,” said Fraction. “Our main character has no idea what’s happened in the other Casanova books either… If that weren’t enough, Pulitzer Prize-winning author Michael Chabon joins series co-creator Gabriel Bá to create a dazzling array of backup stories that explore the worlds—and the people—Casanova left behind.”

The CASANOVA series has roots with Image and the Publisher himself has been a long-time fan. “Casanova is one of my all-time favorite comics, and I think I’ve been pretty open about how gutted I was when Matt and the twins chose to take it elsewhere a few years back, so it should really go without saying that I am incredibly thrilled to have this book back at Image,” said Eric Stephenson, Publisher at Image Comics. “Anyone who is as big a fan of Casanova as I am is going to be amazed by everything the guys have planned this time around.”

CASANOVA VOL. 4: ACEDIA picks up where CASANOVA V3: AVARITIA left readers hanging and will continue the science fiction series with Image Comics in 2014.