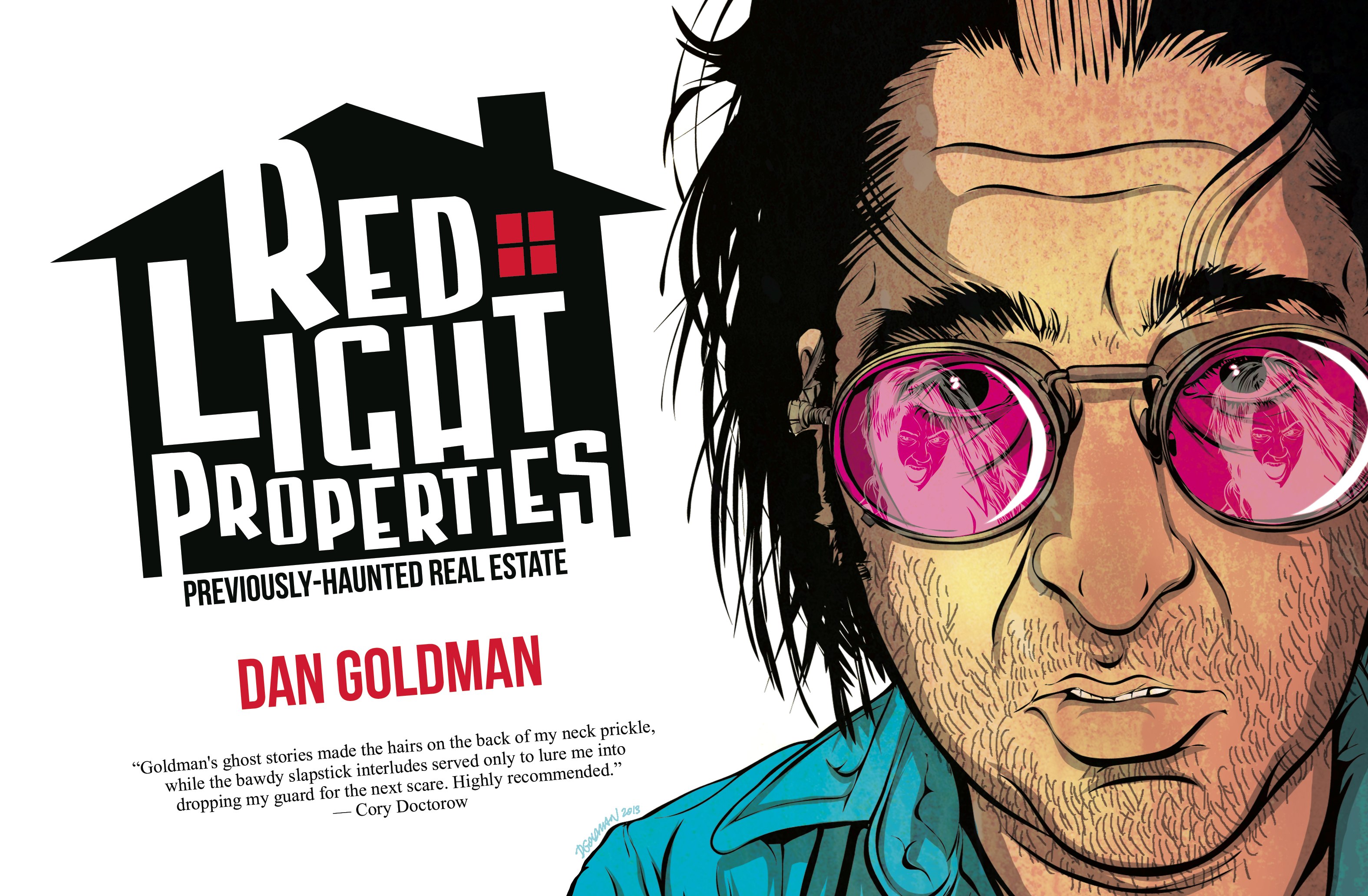 Red Light Properties presents the adventures of an ambitious Miami real estate agency with a very…specific business model. The husband-and-wife run agency unearths properties that are unsellable because they’re haunted. The husband then cleans out said haunted homes by whatever (often unsavory) means necessary. The ghosts find closure. The seller unloads their property. The RLP Agency receives a fee. Everyone wins… except maybe for the Tobins, who are barely on speaking terms. You see, it’s not an easy business, flipping haunted houses.

Following his Eisner-nominated work on the acclaimed Shooting War, his non-fiction graphic journalism graphic novel 08: A Graphic Diary of the Campaign Trail, and the launch of the web comics collective ACT-I-VATE, Red Light Properties represents a departure for Goldman. “2014 finds me at an interesting crossroads. It’s been more than a decade since I began creating comic books. After my work on “08”, I’d had my fill of politics and topical comics. Instead I wanted to use a longer story about a broken but unique family to talk about life, death, family and how the spaces we live in can hang onto echoes of us after we’re gone. ” said Goldman. “This coming January marks four years since the online launch of Red Light Properties and it’s the perfect time for IDW to publish the first print volume as part of their ongoing relationship with Monkeybrain Comics.”

Like fellow artists Brian Bolland, Dave Gibbons and Cameron Stewart, the Brooklyn-based Goldman uses computers to draw comic books. At the forefront of digital-first comics, his approach with Red Light Properties is perhaps more akin to a film production than to traditional comic book storytelling. Building 3D virtual sets to shoot inside of, working off actors’ performances (often his own), Goldman produces the series using just a laptop, a Wacom stylus and a smartphone. As Douglas Rushkoff raved on BOING BOING, “Dan Goldman…has blossomed into one of the industry’s most innovative artists …This book represents an emerging comics talent coming into full possession of his storytelling powers.”

On the eve of his 40th birthday this May, the print publication of Red Light Properties represents a major milestone for the Eisner-nominated writer/artist and his series. With its memorable cast and mad mash-up of Ghostbusters and Property Brothers, Red Light Properties will have readers talking for years to come.

About Dan Goldman:
Initally launched and serialized on Tor.com on January 4, 2010, chapters from the series have been available as digital downloads on iBooks, Kindle and Nook. For the past year, it’s been available exclusively as a digital-first series on Comixology through Monkeybrain Comics. Along with writing and drawing his own groundbreaking comics, Goldman serves as Story Sync Architect of AMC’s second-screen applications for The Walking Dead and Breaking Bad. Goldman has spoken at SXSW Interactive, MIT’s Futures of Entertainment and numerous comic book conventions about digital-first publishing and the digital-only production processes.

About IDW Publishing
IDW is an award-winning publisher of comic books, graphic novels and trade paperbacks, based in San Diego, California. Renowned for its diverse catalog of licensed and independent titles, IDW publishes some of the most successful and popular titles in the industry, including: Hasbro’s The TRANSFORMERS, G.I. JOE and MY LITTLE PONY; Paramount’s Star Trek; Nickelodeon’s Teenage Mutant Ninja Turtles; 2000AD’s Judge Dredd; The Rocketeer; Toho’s Godzilla; Wizards of the Coast’s Magic: The Gathering and Dungeons & Dragons; and the Eisner-Award winning Locke & Key series, created by best-selling author Joe Hill and artist Gabriel Rodriguez. IDW is also home to the Library of American Comics imprint, which publishes classic comic reprints, Yoe! Books, a partnership with Yoe! Studio, and the multiple award-winning Artist’s Edition imprint.