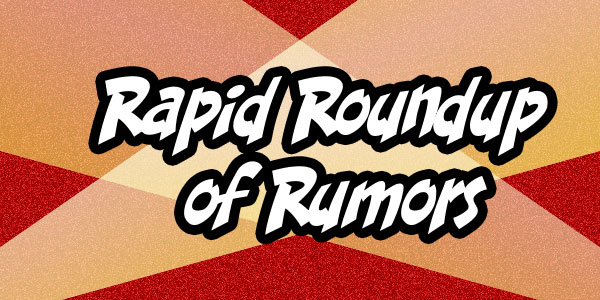 Rapid Roundup of Tinsel Town Rumors and News for December 02, 2013

It’s time for another roundup of rumors and short bits of information coming out of Tinsel Town. This week, it’s all about Fast and Furious, more movies from DC Comics and Warner Bros., Doctor Who, and drones delivering your trade paperbacks.

With the sudden death of Paul Walker over the weekend, some are wondering what will happen with the Fast and Furious franchise.  While production has halted on the seventh sequel, the team behind the flick say the project will not be abandoned entirely. Many key scenes with the actor have not been filmed. Production is expected to resume later this week.

We have known that Elizabeth Olsen will play Scarlet Witch in the upcoming Avengers movie, and the actress seems mighty chatty about the project.

She’s nuts, she’s crazy. She has more things wrong with her than any character I’ve ever played. She can tell you where an object has been, she can tell you what your future is, she can connect with the dead and people from other universes, and she’s the only person in this universe who’s capable of doing that. She’s unbelievable; it’s so cool. I grew up loving ‘Star Wars’ and ‘Lord of the Rings,’ and anything that has this other type of world or universe to it is so fun. Honestly, knowing that Quicksilver is going to be in this movie, and knowing how Scarlet Witch changed reality in House of M, the ending to this movie could very well be the gateway Marvel and Disney need to get the mutants out, and the Inhumans in.

via Ain’t It Cool

Lionsgate has released information regarding the next two Hunger Games movies.

In “Mockingjay Parts 1 & 2,” we follow heroine Katniss Everdeen’s journey as she leads the districts of Panem in a rebellion against the tyrannical and corrupt Capitol. As the war that will determine the fate of Panem escalates, Katniss must decipher for herself who she can trust and what needs to be done, with everything she cares for in the balance.

Yeah, we’re just throwing this in here, because we know a large number of you are fans of the Hunger Games series.

Looks like they are rebuilding portions of the Kent farm for the upcoming Batman vs. Superman movie. Want to see even more DC Comics properties on the big screen. The latest rumor out of Warner Bros. has the studio releasing two low-budget superhero movies each year.  Already in talks are features in the $20 million to $40 million range surrounding Suicide Squad, Booster Gold, Deathstroke, Team 7, and more.  While you may be shuddering at the thought of a low budget hero flick ala the Justice League live zction television show from long ago, keep in mind $20 million is quite a bit of money if the right team is on board.

300 had a $65 million budget, Chronicle made it to the box office with a $12 million bottom line, and James Gunn’s Super has a $2.5 million budget. The rumor (found at Bleeding Cool) also mentions the budgets are production only, and do not include marketing, which often double the overall budget for a movie.

Disney’s Frozen help heat up the box office this holiday weekend. Though it came in second place, it did earn $66 million in ticket sales.  Apparently, this is the largest opening for a Disney film. And even though Hunger Games took the top spot, Disney isn’t hurting too bad – Thor: The Dark World held at the number three spot.

With the next season of Doctor Who just around the corner (providing the corner is several miles from where you are right now), everyone is wondering how the creators will address the Peter Capaldi issue – you know the one – Peter Capaldi appeared in The Fires of Pompeii, so how can he be the Doctor if the Doctor doesn’t cross his own time stream.  I’m sure it will be all worked out, and it wouldn’t surprise me if Tom Baker’s speech to Matt Smith in Day of the Doctor hasn’t already spelled it out for us.

Apparently the show is still going… and there will be a major death in the premiere of Season 7.  Huh…

Still haven’t seen any pictures of the Dinobots have we? Optimus prime is getting an updated design, but nothing that ties us into the Age of Extinction title.  Before anyone starts screaming (not star screaming) “reboot,” Michael Bay has a few things to say…

“It feels like a new chapter, this movie,” he says. “But it’s not a reboot. This movie lives in the history of the ‘Transformers’ movies, and this one starts three years after the last. It feels fresh.

Bay also went on to say that there won’t be any goofiness in this one.  I’ll let you use the comment section to sling your best one-liners at that comment.

In an interview with Unleash the Fanboy, Marc Silvestri said that Witchblade will appear in the Darkness movie.

“As we were going along, it just made more and more sense storywise to have Witchblade in there. I’m not going to spoil too much more, but it makes perfect sense. First we were kind of worried, how do you, two origins, but it started to come together.  It started to make more and more sense. We’re excited about that, that’s a big project that we’re working on right now.”

via Unleash the Fanboy

DRONE DELIVERY OF YOUR TRADE PAPERBACKS

You may have seen the 60 Minutes report where Amazon wants to use unmanned drones to deliver items under five pounds to your house on the same day you order it. And since every other site on the Intardwebz is talking about it, I figured we might as well get in on the act. Wakka Wakka….

According to Jeff Bezos, this is going to reduce the environmental impact of delivery vans driving around cities. Those within 10 miles of a fulfillment center may see the drones dropping off trade paperbacks, new Blu-ray releases, and super hero themed sex toys… well maybe… the items must be under five pounds for the copters to do their thing. Mr. Bezos says it will be another four to five years before the drone fleet is ready to take to the skies blocking out our precious sunlight.