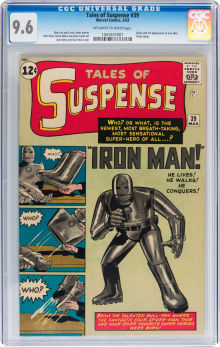 The first selections from the Don/Maggie Thompson Pedigree Collection hit a combined $835,384 to lead $5.8+ million in comic books and original comic art at Heritage Auctions. Every one of the 1,700 lots found a buyer during the Nov. 21-23 auction in Beverly Hills, including a 9.6 copy of Tales of Suspense #39 which changed hands for a stunning $262,900.

The auction was bookended by a $1.3+ million offering of animation art, drawings, and concept paintings in Heritage’s second Animation Art Signature® Auction this year. However, it was the debut of the Don & Maggie Thompson Pedigree collection that stole the show, garnering headlines worldwide due to its quality and the passion of its owners. The Thompsons were responsible for launching as well as participating in several publications that brought readers closer to creators, characters and fellow fans. Starting with a mimeographed one-sheet called Harbinger in 1960, the two produced a variety of other publications until both jointly edited Comics Buyer’s Guide until Don’s passing in 1994. Maggie then served in an editorial role until the end of the publication’s run earlier this year.

“I’ve handled a lot of collections during my time at Heritage but this one is extra special – because Maggie is a special lady,” said Steve Borock, Senior Consignment Director for Comics at Heritage Auctions. “She spent her lifetime collecting comic books and the payoff is great. My phone bidders were ecstatic with their wins. I can’t wait to see how her books perform in February.”

“This first installment of what I’m calling ‘My Pedigreed Adventure’ has been rewarding in more ways than one,” Thompson said. “Heritage Auctions has consistently displayed unvarying kindness and knowledge. Its experts permitted me to profit from my hobby without ever treating my treasures solely in terms of their market value.”

Among the top lots of a diverse selection of original comic art is Weird Science #15, with art by Wally Wood, from 1952 sold for $71,700 following interest from 18 bidders. Frank Frazetta’s The Tempest, an oil painting depicting an iconic image of modern fantasy art, sold for $65,725 and a rare and original hand-painted cover for Uncle Scrooge #43 by Carl Barks sold for $53,775.

A complete nine-page story featuring Uncle Sam and original art by Will Eisner and Lou Fine for National Comics #13, 1941, sold for $53,775.

Brent Anderson’s Fantastic Four cameo in the original cover art for X-Men Annual #5, 1981, brought $44,812 and likely a new record for the artist.

Heritage Auctions is the largest auction house founded in the United States and the world’s third largest, with annual sales of more than $800 million, and 800,000+ online bidder members. For more information about Heritage Auctions, and to join and receive access to a complete record of prices realized, with full-color, enlargeable photos of each lot, please visit HA.com.