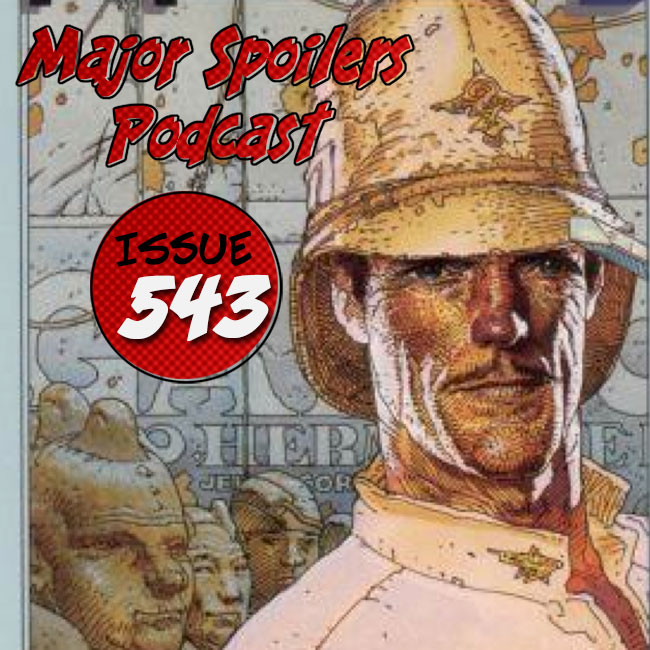 This week on the Major Spoilers Podcast: A visit to the Airtight Garage, Batman #24, The Avengers A.I. Rocket Girl #1, and Kiss Me Satan #2. Plus, the fight to end all fights featuring some of Doctor Who’s greatest villains.

MATTHEW
Avengers AI #4
Writer: Sam Humphries
Artist: Andre Lima Arqujo
With the Vision M.I.A., and A.I. considered a global threat, what’s a robot to do? • Teaming up with S.H.I.E.L.D. the Avengers track down cyberterrorist Dimitrios’ signal and prepare to take him out… • Query: It couldn’t really be that easy, could it? • Response: No.

RODRIGO
Kiss Me Satan #2 After an attack from a vampire maid, Barnabus Black and the witches flee their hiding spot in a cheap Big Easy motel. Barnabus says he knows a safe place, and as they cross the historic Garden District Cemetery, zombies erupt from their graves and attack the group. A new hit man arrives who is known as THE BONE WRANGLER, and his power is control of the undead.

ZACH
Rocket GIrl #1
Writer: Brandon Montclare
Artist: Amy Reeder
A teenage cop from a high-tech future is sent back in time to 1986 New York City.  Dayoung Johansson is investigating the Quintum Mechanics megacorporation for crimes against time.  As she pieces together the clues, she discovers the “future” she calls home – an alternate reality version of 2013 – shouldn’t exist at all!
Rating:

Major Spoilers Poll of the Week
As the 50th anniversary of Doctor Who approaches, it is time to sit back and think about the best and worst villains of all time. While we can come up with lists (because everyone loves a list), it’s much more fun to have the baddies get in the ring in a no holds barred battle for galactic dominance.
Who would win in a fight to the death?
Will you attend a comic book convention between October 01, 2013 and December 31, 2013?
[poll id=”306″

Discussion:
Mobius 3: The Airtight Garage
The Airtight Garage (French: Le Garage Hermétique or, in its earliest serialised form, Le Garage Hermétique de Jerry Cornelius) is a lengthy comic strip work by the artist and writer Moebius (real name Jean Giraud). It first appeared in discrete two-to-four-page episodes, in the Franco-Belgian comics magazine Metal Hurlant between 1976 and 1980, and later in the American version of the same magazine, Heavy Metal, starting in 1977. It was subsequently collected as a graphic novel in various editions.

Mobius has explained that the story was improvised in a deliberately whimsical or capricious manner. For this reason, the story is at times (deliberately) confusing. The “garage” itself is actually an asteroid in the constellation Leo which houses a pocket universe. Major Grubert orbits the asteroid in his spaceship Ciguri, from which he oversees the development of the worlds contained within. Several entities, including Jerry Cornelius, seek to invade the garage.