What happens when you meet your greatest hero and he doesn’t turn out to be who you thought he was? Well, the Superior Spider-Panel set that question in motion for Flash Thompson, a.k.a. Venom, with the announcement of Darkest Hours, a four part story arc starting in Superior Spider-Man #22 and continuing through to Superior Spider-Man #25. For the cover to that, and some more Spider-News, take the jump. 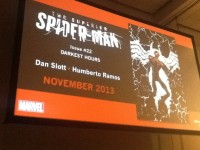 It seems one of the larger themes of the Superior Spider-Panel was having Ock/Spidey meet a number of Peter’s old acquaintances, be they friend, foe, or clone. As not only is he meeting Venom/Flash Thompson, but we also have encounters with Betty Brant, Black Cat, Scarlet Spider (the Parker clone Kaine), and Carnage, in Superior Carnage, coming up. On top of this he’s collecting classic Spidey rogues and keeping them on his new island for an unknown purpose. And the Green Goblin is going to be a huge influence to the story later on this year, so that should be entertaining, watching Spidey’s two smartest foes face each other.

The other books discussed at the panel, Daredevil and the Superior Foes of Spider-Man, are going to keep on doing what they’ve been doing, telling good, character driven stories. There was also some mention of a potential spin-off for Spider-Man 2099, but it was mostly left up in the air.