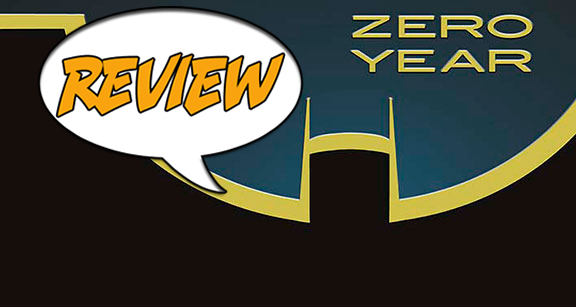 Witness The New 52 origin of The Dark Knight in “Batman: Zero Year!” Twists and turns are around every corner as Bruce Wayne takes the final steps toward his destiny! And in the backup story, learn more about how different Gotham City was at this dangerous point in time.

Pros
Filling in some of the gaps in Batman’s history will help us understand the hero better.
Both Capullo and Albuquerque deliver strong art matching the stories.
Cons
Readers should learn as much as you can about the Dark Knight’s past to get as much out of the book as possible.

Previously in BATMAN: We’ve seen how Frank Miller and other creators have presented the Dark Knight’s origin. Well, there are still a lot more gaps left to be filled in, so Snyder and Capullo will spend the next several months updating parts of how Bruce Wayne became Batman.

I remember several years back when Scott Snyder and Kyle Higgins (now on Nightwing) presented a miniseries called Gates of Gotham. I found myself wondering, why doesn’t DC explore more of Batman’s history? There seem to be a great many tales left untold, and this presents the perfect opportunity to make Batman’s past as relevant as his present has been.

Of course, many creators in the Bat-family of comics have been working on turning Batman’s famous rogues gallery into more modern characters, so why not look at the hero himself? Makes sense to me! (Actually, one of Batman’s best-known baddies plays a part in this story as well, so keep an eye out for that development!)

Speaking of villains, we see the Red Hood and his gang being taken on by Bruce wearing a different mask, and we learn about him and his group. Is the Joker still under that hood? We’ll see as the story unfolds.

One of the upgrades that’s been happening in Batman is the integration of advanced technologies into the Dark Knight’s arsenal. We see more of that taking place in this first part of the “Zero Year” storyline, including a device that can create a three-dimensional map, something very useful to crime fighters today, I’m sure!

Long-time fans of Batman will see several well-known elements in the Dark Knight’s mythology appear for the first time, including the huge penny previously seen in the Batcave and the Wayne Enterprises building (complete with bat-ears on the top of that skyscraper). There’s also a touching flashback showing Thomas Wayne asking his son what he loves about Gotham. I liked Bruce’s reply, that “it’s a place where you can be anyone.” What a perfect answer for someone destined to wear the cape and cowl!

We do see Bruce show some behaviors the character doesn’t commonly exhibit, including giving someone “the finger.” And we learn about the Kane family becoming part of the Wayne dynasty, including Bruce’s Uncle Philip. In order to keep everyone around him safe, Bruce wants to remain “legally dead.” That creates an opportunity for Uncle Philip, one Bruce didn’t intend, I’m sure.

GREAT SCRIPTING MOVES US ALONG QUICKLY

Snyder’s script is fast-paced and engaging, with those wonderful “easter eggs” sprinkled throughout the story. If you aren’t familiar with Batman’s past, you won’t miss them, but if you are, they add some interesting tidbits along the way.

The backup story is appropriately named, “Where the Hell did he Learn to Drive?!” and answers that question with lots of action and a fast car, so be sure to read that one, too!

THE ISSUE’S ART SPARKLES AS WELL

Capullo’s art (with Miki’s inks) continues to augment Snyder’s story, as it has since the two started working together when the New 52 began. I honestly have turned into a big Capullo fan, and look forward to his tremendous displaying of action and character moments each issue.

Also, Albuquerque’s portrayal of the backup story fits the tone superbly. We’re dropped right in the middle of a car chase, and the art grabs us and won’t let go until the final panel.

BOTTOM LINE: “ZERO YEAR” IS OFF TO A POWERFUL START!

The “Court of Owls” story was perfect for a year-long epic, and with this issue, I’m sure the next 12 months will be just as gripping. I’m always a big fan of finding out how things got the way they are, so I’m going to be there every month to see just how so much of Batman’s life fell into place. I hope you’ll be along for the ride as well!