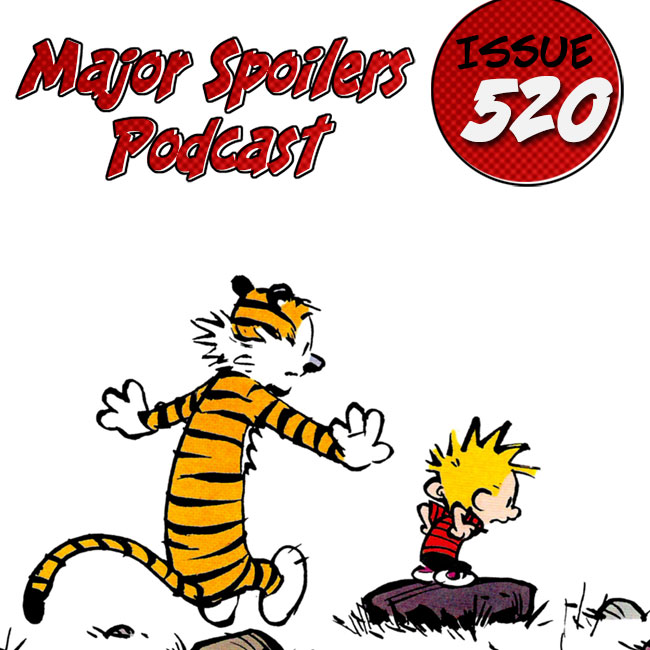 This week on the Major Spoilers Podcast, Movies, Television Shows and Calvin and Hobbes (we don’t actually talk about comic books this week).

NOTE: There are some major spoilers in the Star Trek Into Darkness and Doctor Who reviews, so take precautions if you don’t want to be spoiled.

REVIEWS
STEPHEN
Cloud Atlas
An exploration of how the actions of individual lives impact one another in the past, present and future, as one soul is shaped from a killer into a hero, and an act of kindness ripples across centuries to inspire a revolution.

MATTHEW
Doctor Who: The Name of the Doctor
Clara is summoned to an impossible conference call, alerting her that the deadly Whisper Men are closing in on Vastra, Jenny and Strax. Someone is kidnapping the Doctor’s friends, leading him toward the one place in all of time and space that he should never go. It’s a deadly trap that threatens to unravel his past, present and future…

RODRIGO
Star Trek Into Darkness
With a personal score to settle, Captain Kirk leads a manhunt to a war-zone world to capture a one man weapon of mass destruction. As our heroes are propelled into an epic chess game of life and death, love will be challenged, friendships will be torn apart, and sacrifices must be made for the only family Kirk has left: his crew.

ZACH
Teen Titans Go!
Teen Titans Go! focuses on the “funny business” that happens between the Teen Titans when not saving the world and when living together as teenagers without adult supervision. The Teen Titans must deal with situations such as teenage pranks reaching a whole new level, or having to take Driver’s Ed after wrecking the Batmobile. The show is part of the DC Nation block on Cartoon Network.