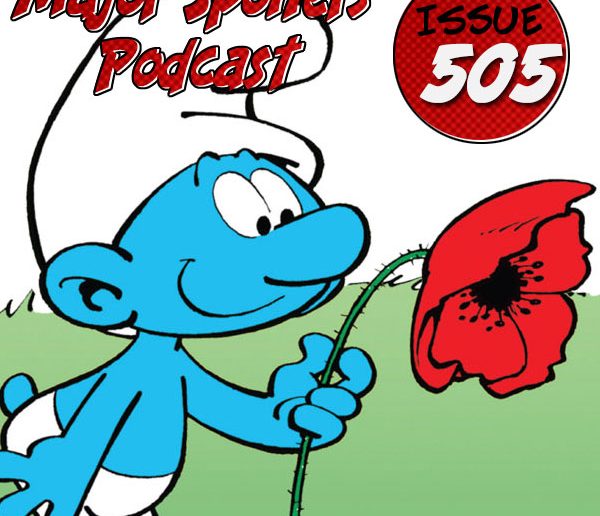 his week, on the Major Spoilers Smurfcast: Smurfs! And our reviews of The End Time of Bram and Ben, The Answer, Powers, Batman, and more smurfy goodness than you can shake a smurf at, you smurfers!

REVIEWS
STEPHEN
Batman #17
Writer: Scott Snyder
Artist: Greg Capullo Publisher: DC Comics Cover Price: $3.99
This is it: The stunning conclusion to “DEATH OF THE FAMILY”! Who lives? Who dies? Who laughs last? Find out as Batman and The Joker face off one last time!

MATTHEW
Powers – The Bureau #1 Writer: Brian Michael Bendis Artist: Michael Avon Oeming Publisher: Marvel Cover Price: $3.99 Pilgrim is now a federal agent and dealing with the biggest powers cases in the entire country. But will this new life close the closet full of skeletons she carries with her? (Absolutely not!) And what does this mean for her old partner, Walker?

RODRIGO
The Answer #2 Writer: Dennis Hopeless Artist: Mike Norton Publisher: Dark Horse Comics Cover Price: $3.99 On the run in Cincinnati, punctuation-faced hero The Answer must rescue the abducted librarian Devin from a sinister gang of asylum nurses and orderlies . . . but she may not WANT to be saved! More insane superhero adventure!

ZACH
End Times of Bram and Ben #2 Writers: James Asmus and Jim Festante Publisher: Image Comics Cover Price: $2.99 Bram’s wild and very public response to the Apocalypse brings a cult of followers to his door – and warring agents of the End Times! Ben, meanwhile, gets blue balls and a trip to Hell. Destruction! Betrayal! Crotch-grabbing! And the violence kicks into high gear!

Major Spoilers Poll of the Week
For the last couple of days, rumor has spread like wildfire across the Intardwebz that Marvel is considering a big crossover between the 616 Universe and the Ultimate Universe (Universe 1610), with the ultimate outcome (see what I did there) being the closure/end of the Ultimate line of print comics.  Brian Michael Bendis, the guy that has been helming the U-Universe, and doing a dang find job of it (save for that horrible Loeb debacle), says this isn’t what is happening.  But that got us wondering anyway…

Discussion:
The Purple Smurf
The Black Smurfs (English title The Purple Smurfs) is the first album of the original French-language Smurfs comic series created by Belgian artist Peyo, first published in 1963. In a little mushroom village live the Smurfs, diminutive blue-skinned humanoid creatures. One day, one of them gets stung by a  purple fly that turns his skin purple, reduces his vocabulary to the single word “gnap!”, and causes him to go berserk. He bounces around and bites other Smurfs on their tail, which turns them into purple Smurfs as well. Soon, almost everyone in the village has become a purple Smurf, and Papa Smurf, the leader, tries to find a cure and cease the tail-biting epidemic.