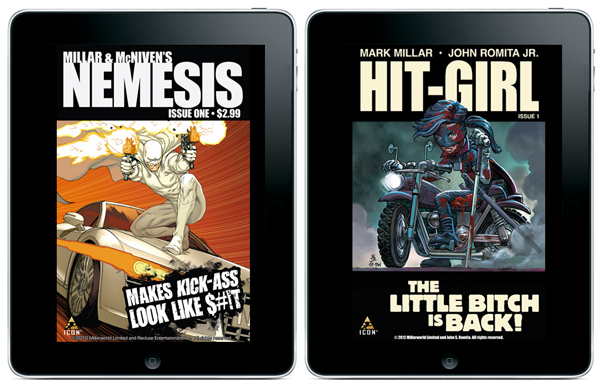 Today comiXology – the revolutionary digital comics platform available across the iPhone, iPad, Android, Kindle Fire and the Web – and Mark Millar, creator of Kick-Ass and one of the most celebrated comic authors of all time, announced today the exclusive English language digital debut of two Millar ICON series, Nemesis and Hit-Girl, with plans for more os his ICON digital releases forthcoming!

With only Kick-Ass and Wanted available on comiXology for some time, digital comic fans have waited with bated breath for more digital releases from Mark Millar. The wait is over! Fans will be excited to know that, not one, but two of Millar’s outstanding ICON titles, Nemesis and Hit-Girl, are now available across comiXology’s entire platform that recently crested 100 million downloads of comic books and graphic novels!

“ComiXology boasts the ability to help creators reach a worldwide audience but when a creator at the caliber of Mark Millar joins with us, it’s the comic fans around the world that really win,” says co-founder and CEO of comiXology David Steinberger. “Now Millar fans have an excuse to relive his amazing ICON stories as they’re transformed with comiXology’s immersive Guided View reading experience, while Millar’s work will be poised to find a whole new audience!”

“I couldn’t be happier about this. The comiXology guys are great and I love the idea of the Millarworld titles reaching people who want to try my books after Kick-Ass 2, but don’t live near a comic-book store.” said Millarworld founder Mark Millar. “From this moment on, ALL my books will be available in digital 12 weeks after they’re released in print and we won’t have any delays again. Kick-Ass 2, Jupiter’s Legacy, The Secret Service, Supercrooks, Superior and everything else will be coming to digital very soon and we’ve now got a system in order to make sure it’s never more than 3 months after the print editions. It’s Millarworld’s gift to humanity in these troubled times!”

About Mark Millar
Mark Millar is the writer of Civil War, Marvel’s biggest-selling series of the fifteen years, Ultimate X-Men, Wolverine: Old Man Logan, Spider-Man, Ultimate Fantastic Four and The Ultimates (described by Time magazine in 2010 as the best comic series of the decade). His Millarworld line of comics boasts a roster of creator-owned books such as Wanted, turned into a blockbuster movie starring Angelina Jolie; Kick-Ass, which starred Nicolas Cage; and Nemesis, which Ridley Scott is producing for Fox with Joe Carnahan directing from a script by Joe and Matthew Carnahan. The Kick-Ass 2 movie is released in June, starring Jim Carrey and Chris Mintz-Plasse as shooting begins on The Secret Service, co-created with Watchmen legend Dave Gibbons, with X-Men First Class director Matthew Vaughn writing and directing. In his native UK, he’s the editor of CLiNT magazine, an advisor on film to the Scottish government and managing director of his film and television company Millarworld Productions. In Los Angeles, he recently signed a deal to oversee all Fox’s upcoming superhero movies including The Wolverine, X-Men Days of Future Past and Fantastic Four”