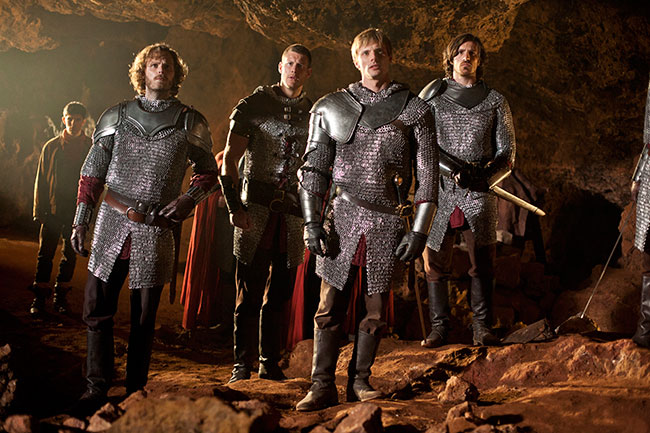 Crossing soothsayers can have a devastating effect on your destiny – a lesson King Arthur learns the hard way in an all-new episode of MERLIN, “The Disir,” which airs this Friday, February 1, at 10 p.m. ET/PT on Syfy In the inky depths of an ancient pool, three soothsayers known as The Disir (played by Frances Tomelty, Sian Thomas, Helen Schlesinger) cast a dark judgment upon the king of Camelot. But despite Merlin’s warnings, headstrong Arthur refuses to take their words seriously, and their fury rains down on Camelot. Only the greatest sacrifice can appease them, and with the kingdom in jeopardy, is it one that Arthur is prepared to make?

Faced with the King’s uncertainty, Merlin has just one chance to save him from his destiny, but this decision comes at the highest price.

Arthur’s famed Round Table has been manned from its inception by a core quartet of Knights – Sir Leon (Rupert Young,), Sir Gwaine (Eoin Macken), Sir Percival (Tom Hopper) and Sir Elyan (Adetomiwa Edun). In “The Disir,” the four knights once again play a key role in the support and protection of Arthur. Bradley James, who portrays Arthur, says that for the series’ five seasons, his favorite aspect of MERLIN has been the camaraderie and friendship built amongst he and the actors portraying the core group of Knights.

“Hanging out with the lads has been such a blessing – they’re a great bunch of guys who are all so very different from each other that we’ve banded together brilliantly,” James says. “As far as the knights went, everybody brings his own individual style to it, no two are the same. Each brings something different to the table in a weird and wonderful way.

He explains: “Rupert is the quickest witted, Owen is the most ridiculous, Adetomiwa is a misunderstood scholar, and Tom is hilarious because he has a vulnerable side that he’s not afraid of in anyway, and he gets himself into certain situations that are priceless because of that vulnerability. If you want a joke, though, head in Rupert’s direction.”

James says the four actors were joined by Merlin himself in off-screen antics. “Along with Colin, we’ve had such a great time being together.There’s always a lot of laughter, making up songs, playing practical jokes, all of that just spontaneously happens when you spend a lot of time together.” MERLIN fans can spend more significant time with the Knights of the Round Table when “The Disir” debuts Friday, February 1, at 10 p.m. ET/PT, only on Syfy.