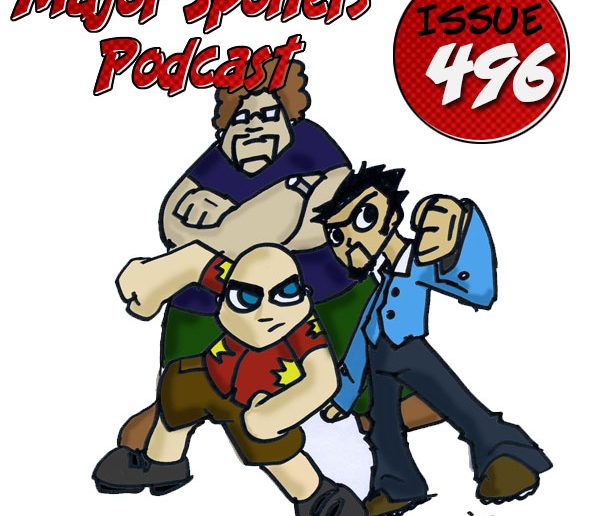 This week, on the Major Spoilers Podcast, there’s Trouble with Girls, Mars Attacks the Transformers, Daredevil and we have The Answer! But what was the Question?

REVIEWS
STEPHEN
Mars Attacks Transformers
Writer: Shane McCarthy
Artist: Matt Frank
Publisher: IDW Publishing
Cover Price: $3.99
AUTOBOTS vs. DECEPTICONS vs. MARTIANS?! The invaders from Mars take advantage of the colossal Cybertronian’s conflict and begin their assault on Earth in full force. It’s Martian vs. Machine as the audacious Autobots and the devilish Decepticons begrudgingly join forces to repel the inhuman invaders and save the planet!

MATTHEW
Legion Lost #16 Writer: Tom DeFalco
Artists: Andres Guinaldo and Mark Irwin • Superboy and The Ravagers guest-star!
• In order to save billions of lives, the Lost Legionnaires must decide if they are willing to sacrifice millions when they detonate a bomb that will destroy the alien machine from Daggor! • Plus, more on the origin of Harvest!

RODRIGO
The Answer #1
Writers: Mike Norton, Dennis Hopeless
Artists: Mike Norton
Publisher: Dark Horse Comics
Cover Price: $3.99
Devin McKenzie is an insomniac librarian with a knack for solving puzzles. The Answer! is a masked crime fighter with a giant exclamation point on his face. Aside from a penchant for late nights, they share nothing in common… until both become embroiled in a deadly mystery surrounding a sinister motivational speaker!

ZACH
Daredevil #22 Writer: Mark Waid Artist: Chris Samnee Publisher: Marvel Comics Cover Price: $2.99
Marvel is pleased to present your first look at Daredevil #22, from the critically acclaimed creative team of writer Mark Waid and artist Chris Samnee! Daredevil teams up with the AL- NEW Superior Spider-Man! But he’s not alone as Stilt-Man returns better than ever thanks to some last minute help from Doctor Octopus. It’s a superior team up like you’ve never thought possible this January in Daredevil #22!

Major Spoilers Poll of the Week
Two men, enter, one man leaves, it’s the slug fest you’ve always thought about, but never had the time to voice your opinion on… until now!
[poll id=”269″]

Discussion:
The Trouble with Girls
The Trouble with Girls is a satirical action series starring Lester Girls, who wants to be simply an “average guy” with a dead-end job, a plain wife, and no adventures more exciting than a good night’s sleep. But Lester can’t go for a drive without terrorists launching missiles at him, or walk into one of his many mansions without a beautiful, talented, curvaceous woman reposing half-dressed on his bed. Wealth, adventure, sexual magnetism, dashing good looks, and the savoir faire of a Hollywood action hero are what he calls “the curse of Girls.”