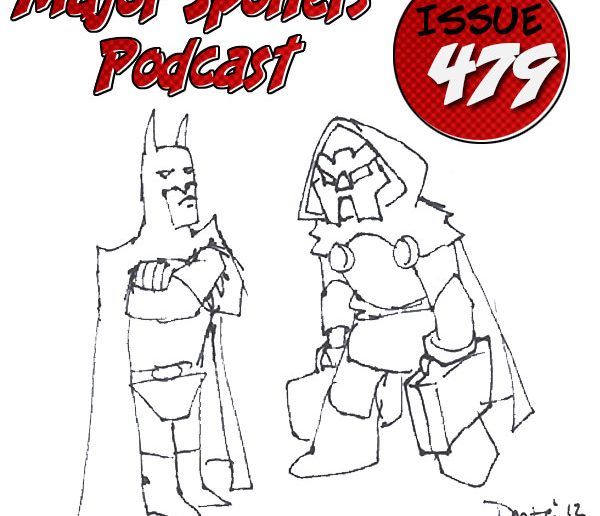 Major Spoilers Podcast #479: The Doom That Came to Gotham

In this issue: You got your Batman in my Cthulhu! You got your Cthulhu in my Batman! Two great tastes that taste great together? Also, Change #1, Annoying Orange, America’s Got Powers, and Number 13.

REVIEWS
STEPHEN
Change #1
A foul-mouthed struggling screenwriter who moonlights as a car thief. An obscenely wealthy rapper completely disconnected from the real world. A dying cosmonaut on his way back to Earth.
Los Angeles is being toyed with by destructive forces that repeatedly find the city through time and swallow it whole, and those three are the only people able to save it – if they survive the fanatics who live in the hills, National Security Agency agents, and the horrors that lurk in the Pacific Ocean.

MATTHEW
America’s Got Powers #4
As the televised games continue and Tommy tries to tap into his enormous power, the government begins shutting things down. Their plan to use the kids as human batteries is close to realization. Will the renegade teens known as The Rejected stop it, or only make matters far, far worse?

RODRIGO
Annoying Orange #1: Secret Agent Orange
Secret Agents 00-Orange and Oh-Oh-Nerville may be the best spies working on Her Majesty’s Select Produce, but they haven’t gone up against the color purple-stealing mastermind Grapefinger before! With the most insane scheme ever devised, the fate of the world is at stake. Can Orange annoy the bad guys into submission?

ZACH
Number 13 #1 The young bionic amnesiac known as Number 13 searches for answers and his creator, in a future world that’s been brought to its knees by the vicious Monstrum Morbus plague. Weakened by his last explosive encounter, Number 13 is discovered by a group of curious, scavenging mutants who have banded together for survival. They dub him “Thirteen” and invite him to join their group—and one of them knows exactly what horrible purpose he was built for!

Major Spoilers Poll of the Week
The highly anticipated, and highly criticized, The Hobbit arrives in theaters (in the United States of America) this week, and you know that has to be the basis of the Poll of the Week.
[poll id=”264″]

Batman: The Doom That Came to Gotham is a limited series published by DC’s Elseworlds and created by Mike Mignola. The story places Batman as a pulp hero adventurer in the 1920s where he battle against H.P. Lovecraft-inspired monsters.