SHERLOCK HOLMES: THE LIVERPOOL DEMON #1 (of 5)
32 pages FC  •  $3.99  •  Teen +
Written by Leah Moore, John Reppion
Art by Matt Triano
Cover by Francesco Francavilla
Fans, ask your retailer for these variant incentive covers!
• Francavilla “virgin art” cover retailer incentive
• Francavilla “negative effect art” cover retailer incentive
Sherlock Holmes is busy doing what he does best, solving a case of far-reaching international notoriety. It has landed him at the Port of Liverpool, a bustling hub of commerce both legitimate and illicit. As that chapter closes, ours begins. They head to Lime Street Station, to catch a fast steam locomotive home to London and Baker Street, when violent weather keeps The Great Detective and Watson in  Britain’s second city a while longer. Long enough to encounter a monster, discover the Liverpool underworld, and to become embroiled in one of his strangest cases yet.

GARTH ENNIS’ BATTLEFIELDS #2 (OF 6): THE GREEN FIELDS BEYOND PART 2
32 pages FC  •  $3.99  •  Mature
Written by Garth Ennis
Art & cover by Carlos Ezquerra
Stiles and Frankie are up against it: trapped on Gloster Hill with a small unit of British soldiers, facing a murderous onslaught by ten thousand Chinese troops. Worse still, they didn’t bring their tank along this time. It’s last man, last round, as the Tankies face their sternest test to date… 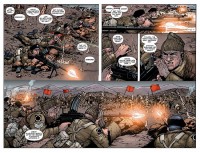 RED SONJA: ATLANTIS RISING #4 (of 4)
32 pages FC  •  $3.99  •  Teen +
Written by Luke Lieberman
Art by Max Dunbar
Cover by Lucio Parrillo
It’s time for the main event!  Red Sonja and Thulsa Doom collide and the fate of Atlantis and Hyborea hangs in the balance.  Can Sonja close the pandora’s box that Thulsa has opened, or will Doom spread the power of the dreaming God across the waters and the lands beyond!

ARMY OF DARKNESS VOL. 3 #7
32 pages FC  •  $3.99  •  Teen +
Written by ELLIOTT R. SERRANO
Art by DIETRICH SMITH
Cover by MARCIO FIORITO
As the evil of the Necronomicon works its way across the world, the ones who have been chosen to fight it are falling. Now, for the first time ever, on a world where the armies of darkness prepare for their greatest battle ever, a glimpse at the final fate of Ashley J. Williams is revealed. Not a dream! Not a hoax! This is the END OF ASH!

JENNIFER BLOOD #20
32 pages FC  •  $3.99  •  Mature
Written by AL EWING
Art by EMAN CASALLOS
Cover by MIKE MAYHEW
Revere, New Mexico, doesn’t get many visitors. There’s Louis Blue, the meth kingpin, out of his territory. Elaine Pruitt, the homicide detective, out of her jurisdiction. Ray Buwick, the wetworks agent, out of his mind. And of course, the reason they’re all there… Jen Fellows, the mother of two. Out for blood…

CHOSEN #3 (of 3)
32 pages FC  •  $3.99  •  Teen +
Created by Marcus Nispel, Gotham Chopra, Sharad Devarajan
Written by Chuck Dixon
Art & cover by Edison George
The epic finale the Chosen saga. After the unsettling conversion of Ryan’s mentor from master to madman, Ryan and Ashley retreat to a remote and idyllic setting far away from the madness of their past. For Ryan, this fragile existence is nothing more than his biding time until the inevitable onslaught of fate. One last confrontation looms with the one warrior that will determine the course of the future for all – himself.