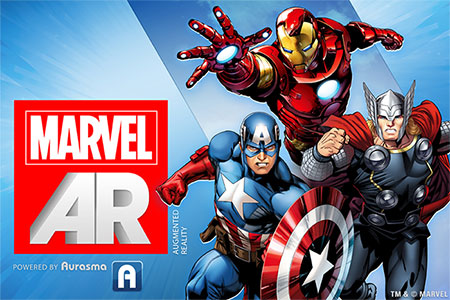 Marvel Entertainment is proud to announce that the Marvel AR app, powered by Aurasma, won the 2012 Mobile Excellence Award in the category of “Best Mobile Application for Entertainment.” The Marvel AR app, which uses augmented reality to provide Marvel’s comic book readers with exclusive original content, launched alongside the top selling Avengers VS X-Men comic book event and is now compatible with all of Marvel’s most anticipated new series launches.

“We’re honored to have been included in this category against such strong competitors including Fandango, TMX, Univision and Snapcuts”, explained Peter Phillips, SVP & General Manager, Marvel Digital Media Group. “Marvel AR is a crucial part of the Marvel ReEvolution, our commitment to evolving all Marvel’s comic book offerings by bringing the worlds of print and digital media together in exciting ways. This is just the beginning of our exciting plans!”

The Marvel AR app lets users go behind the scenes of their favorite comics with exclusive interviews, features, art,  3D action scenes, recaps of past events, and more! It is available on both iPhone and Android devices, from iTunes or Google Play.