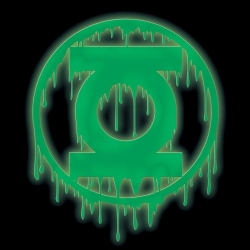 Previously in Green Lantern: Hal Jordan’s ring was taken by the Guardians, but his ol’ pal Sinestro hooked him up, and the two have been bouncing around the universe trying to figure out what the Guardians new plan is and how to stop it. On their journey they met up with another old friend of Hal’s, Black Hand, who promptly decided to kill both Hal and Sinestro, because he read in the Book of the Black that Hal Jordan is destined to be the greatest Black Lantern of all time!

The issue begins with the Guardians of the Galaxy giving the reader a quick history of their attempts to fight back against chaos. This should be familiar to most long-time readers of Green Lantern, but since this is The New 52 and any new or lapsed readers it was a good quick refresher. Ultimately the Guardians decide that the source of chaos in the universe wasn’t emotion or fear, but from willpower. This means their new target is the Green Lantern Corps they created.

In the world of Hal Jordan, things aren’t going so swell. He’s buried alive by Black Hand, digs his way to the surface and is tormented by the prospect of having his father resurrected. The emotional turmoil is rather out of place from the perspective of the reader, because despite Black Hand’s assertion that the living dead would actually be like having his father back since there isn’t a black ring to control him, all the Black Lanterns we’ve seen Black Hand make without rings have been mindless zombies. I feel like that whole confrontation was an attempt to tell the audience there aren’t black rings floating around anymore, so when/if Hal dies and is resurrected as a Black Lantern as the Book of the Black claims, the means will have to be atypical.

As the Guardians look to complete their quest of finding the First Lantern and somehow using his energy, we get a reveal that took me aback–there is an old prison where the rest of the Guardians’ race remains (ironically?) guarding the First Lantern. These Oans apparently are not tied to the green energy of willpower as their eyes glow white instead of green, making me wonder if that’s an indication they are using the power of life or if the white is just a lack of green. No matter the source of their energy, the conflict is brief as there wouldn’t be much of a point to this “Rise of the Third Army” event if the Guardians didn’t get their hands on the First Lantern.

The team-up between Hal Jordan and Sinestro has been my favorite part of the GL title since The New 52 kicked off. Geoff Johns has made their love/hate/mutual respect and distrust dynamic truly enjoyable to read, and the power up moment in this issue was a really clever way to utilize the constructed ring that Hal has been using.

After the primary story we switch pencillers to a second story that picks up essentially where the first left off. I thought it was largely unnecessary to make it a separate story except for the artistic switch; rather than switch without there being any sort of a story imperative (as this week’s Justice League #12 did) it was a reasonable transition that didn’t pull me out of the story like some artist changes do.

The A story has both pencils and inks by Ethan van Sciver, doing some of the best work I’ve seen from him in a while. Black Hand is delightfully grotesque–especially after having his face bashed against a headstone–and Hal Jordan looks consistently bedraggled and half-defeated, which is a pleasant surprise in a superhero comic. The colorist is also to be praised; Hi-Fi had a tough job with the necessary muted pallete of a graveyard, the brightly colored space battle with the Guardians, and the eerily iridescent First Lantern.

The B story with Pete Woods carried the challenge of portraying a consistent set of Guardians with the first story, and while it’s clear from the linework they’re by different artists it isn’t enough to be jarring. The creation of the first member of the Third Army is wonderfully creepy, and while Major Spoilers has lamented the lack of true horror comics recently, the art for this moment should delight those pining for artistic horrors. Tony Avina’s colors for this story are good, though again there’s some discrepancy between the two stories in this regard, this time with the iridescence of the First Lantern. It would be easy enough to explain this away as the effect looks different while on earth, but I believe it’s less of an intentional difference and more so due to having separate colorists.

This comic served its purpose well; as the nominal prologue to the Rise of the Third Army, it got me very excited to see where the crossover goes. I like how DC is handling their crossovers so far in The New 52 with family titles crossing, as it largely seems organic given the content of the books. The writing in Green Lantern Annual #1 was good, although there were some clunky moments necessary for exposition to new readers.The art in the first story was great, but I wish van Sciver could have done the second part of the story as well. Overall Green Lantern Annual #1 earns 4 out of 5 stars, and hopefully the rest of the event will be executed as well as this issue!