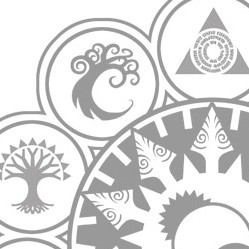 Wizards of the Coast announced a Ravnica-centric addition to the Planeswalker Points system today and sent Major Spoilers the rundown.

Here is what Wizards has to say.

Wizards of the Coast recently announced Planeswalker Points Achievements and Badges.  Today, we are excited to introduce an addition to the program leading into the upcoming start of the Return to Ravnicablock.
Beginning today, players can select a guild of Ravnica to which they will “belong to” on their Planeswalker Points profile. Once they’ve joined a guild they’ll find a new set of achievements they can work towards and badges they can earn. In addition to personal achievements, players will also be able to work towards large-scale achievements as a member of a guild, connecting them to players all over the world. This is an entirely new set of activities that makes being a part of Ravnica organized play events even more unique. At the end of the Ravnica campaign players will still hold on to their earned achievements and badges.
To check out these new features, log on to PlaneswalkerPoints.com. And for more information about all of the guilds associated with Return to Ravnica, and to take a quiz to find out which guild you identify best with, visitGuildsofRavnica.com.

A more succinct summary may be found here. For a quick idea of whats going on though While achievements may seem silly to some, especially outside of video games, I find the move brilliant. Anything that fosters more community involvement is good and this has the added benefit of tying Magic together even more than just a mere series of games. I look forward to more announcements like this as WotC continues to look to the future for Magic. One last thing, Go Simic!