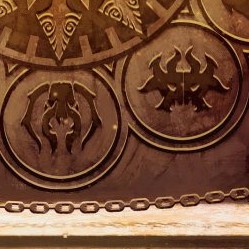 OPINION: Should we “Return to Ravnica”?

For those who don’t know, I play a little card game called Magic: the Gathering. Every year, as new cards come out, we get a different take on a different world through the block system. For me, and many, many others, the best block that Wizards of the Coast (Wizards or WotC) ever created was the Ravnica block. That was seven years ago now. As with another popular block, Mirrodin, being revisited seven years after the fact, this fall we will “Return to Ravnica”. If you have ever heard me talk about Ravnica or Magic, you would imagine that I, and a large portion of the Magic community, are pretty darn excited. Well, you would be right, but that doesn’t mean I don’t have serious reservations. So take the jump for a speculative look at the “success” of the Return to Ravnica block.

Magic is going into its 20th anniversary next year and bringing back its most popular set ever, this should be a brilliant move. While revisiting Ravnica seems like a no-brainer (it is still considered both internally and externally to be one of the biggest successes ever to see print) there are quite a few beats that need to be hit in order for this to work. There are certain areas that are absolutely necessary, some that should be touched upon but aren’t required, and a scant few that need to be avoided at all costs. But before we get into those, we should take a quick look at why the original was such a success. The Guilds: Ravnica was the second block devoted to the multicolor theme. With this came the Guild system, each of the 10 two-color pairs was made into a Guild that dealt with certain aspects of the vast city that is the plane of Ravnica. Each Guild had its own identity, mechanics, and style. These Guilds so defined the block and the color pairs that decks built around those colors are still referred to by the name of the Guild. Not only this, but Magic players around the world have a specific Guild that not only is there favorite, but they actually identify with on a personal level. The Guilds are core to the Ravnica experience and we know are coming back.

Limited: The limited environment throughout the Ravnica block is far and away one of the best and most diverse ever created. Part of this came through the Guilds, as each was able to shine. The other part was in the support that multicolor had making almost any style of deck both buildable and viable. Pros today will still cite Ravnica as the best limited format they have ever played. This is likely to the most challenging aspect of the Return.

Sub-themes: Ravnica was a diverse, inventive, and creative block ripe with interesting innovations and abounding with riffs upon themes and ideas. These innovations came from everywhere, single cards all the way up to the block itself. We had ten brand new mechanics, multicolored split cards, hybrid mana, four-color creatures, a fully realized block format and design (the first of its kind), and more. Some of these weren’t as successful as others and not all of them are necessary, or possible for that matter, to do in Return to Ravnica, but some will be. Then there are the sub-themes. Ravnica had two mechanical sub-themes and one flavor one. The mechanical were tokens and enchantments; the flavor is where the most trouble will be as it was diversity.

Both mechanically and creatively Ravnica strove for something greater and the Return has a lot to live up to. The Guilds: At its core, this is what makes the plane of Ravnica what it is. Wizards understands and loves this fact making this the least worrisome of Return’s requirements. That doesn’t mean we have a guaranteed success. Some of the mechanics for the Guilds last time are not reprintable due to power level or general distaste. This means all of the mechanics will be brand new because we can’t pick and choose. Now we have to evoke the same, or similar feel, with the new mechanics but because at least one of the originals was a genuine threat in the tournament scene we have to play it safe so as not to create the next bogeyman. This means a general decrease in the power level of the set which could be a hindrance to the set as a whole.

Limited: This is probably the hardest of the three major points to replicate and the one I have the fewest answers for. Limited is a tough cookie to crack, but Wizards has been doing quite well lately so I will just say I have faith. I doubt it will be better than last time and worry that it won’t be as good, but I still believe they can do it. Why am I willing to just roll with this one? The new block structure, we are getting two large stand-alone sets to draft and then a small set that will combine the other two at the end. This will be a unique year at the very least, and that is the best step in the right direction.

Sub-themes: Now for the area that could make or break the set. Ravnica is a monster of ideas and themes. It would be impossible to hit everything and still have room for something new. Instead we need to hit a few key elements the first, and most challenging, of which is the theme of diversity. Ravnica is a plane where almost anything is possible. Each Guild had multiple types of creatures, multiple sentient entities, and multiple routes to victory. We had dozens of new ideas and multitudes of varying possibilities that congealed into an elaborate whole. And with the size of the sets being smaller and more Guilds in the first set, this is a worrisome prospect. Above all else, diversity is the theme that sets Ravnica apart. Even in token production the set stands apart on diversity, which brings us to the next theme, tokens.

Of the two strictly mechanical themes, this is the more important. Ravnica is vastly populated and what better way to evoke this than with tons of tokens. All four green Guilds produced saprolings, each of a different look and feel, before the block is over we should have four new saproling token inserts as well as at least a dozen others. We need both diversity and numbers, tokens are the way to go and if certain rumors are correct, that shouldn’t be an issue. For the enchantment theme we only need a couple cards and since their numbers have been increasing lately anyhow that shouldn’t be a problem.

The last theme-like entity that needs tackled are specific card sets. Only two are necessary here; though many others could easily be hit on with no trouble, awesome dual lands and hybrid. Each Guild had a vertical cycle (one card at each rarity) of each of these making them very focalizing entities. Wizards has been stating that Return to Ravnica will have quite a few “high-profile” reprints to assist people trying to get into the recently minted Modern format. This and a number of other hints suggest that the big “shock” lands are going to see reprint, which hits half of the requirements. The other half is the one that worries me. On Monday we saw some previews of the Izzet vs Golgari duel decks that include a few cards from Return to Ravnica. One of which is the new Golgari Guildmage that isn’t a hybrid card and this worries me. Hybrid mana made its premiere in Ravnica and many of the hybrid cards became the face of their Guild. All of the Guilds have a hybrid card as one of the top three recognizable faces. Yes, we have seen hybrid implemented incredibly well since Ravnica, but these are part of what made Ravnica unique. Even the prerelease promos were hybrid. Now we don’t need a lot, not even a vertical cycle, but each Guild should have at least one hybrid card, even if it’s a rare. The best slot for these would probably be the secondary legend in each Guild hitting up on another card set in the first and appeasing even more of the Commander crowd. Magic is going into its 20th anniversary next year and bringing back its most popular set ever, this should be a brilliant move and it is. That fact alone should make anybody who cares about the game stand up and wonder if its the right one. Does a new Ravnica stand a chance of living up to the old? Can we get enough new stuff in Return to Ravnica to make it enough of its own thing? Should we Return to Ravnica? I think that its now or never and while I have my concerns, I am ridiculously excited and have faith that WotC can Return to Ravnica. (That name does leave something to be desired though)