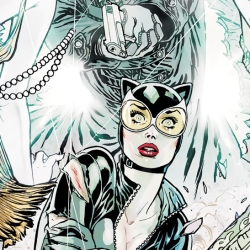 Batman returns to the pages of Catwoman, but how will he and Selina’s new boyfriend, Spark, get along? Major Spoilers squares the love triangle for you right here as Judd Winick’s run on Catwoman comes to a close!

Previously, in Catwoman:  Selina Kyle has been on a reckless rampage, having gotten herself caught by the police then broken out, and now she’s been teaming up fellow superthief Spark, a guy with an electric personality and a penchant for manipulating electrons. The two have teamed up with a police detective to take down a villain that’s been kidnapping people from Gotham’s seedy underbelly, many of them prostitutes and runaways, but now things get complicated as Detective Alvarez gets snatched by the perp.

The issue begins with a quick and helpful thought-box recap, which is something that would serve a lot of the New 52 books well. This isn’t really the time or place for the whole “should DC Comics institute a ‘Previously’ page” debate, but the answer is that yes, they should. Things are going south quickly for Catwoman and crew, and Selina realizes it’s time to call in the big guns. This leads to a great scene where Spark breaks the Bat-signal and redoes it as a hilariously drawn Cat-signal, leaving behind a device for Batman to track them.

Alvarez wakes up in the clutches of “Dollhouse,” (the daughter of the Dollmaker and granddaughter of Toyman) a villain who has the world’s creepiest museum. In a really well-paced action sequence we get a look at the museum; Dollhouse has kidnapped and murdered enough people that she can furnish a series of homages to different periods of history, and she finances it all by harvesting and selling the organs of her victims. This is a nice “realistic” (at least considering the medium) touch to a villain’s backstory–so often we see villains who mysteriously are somehow smart and rich enough to make ridiculous themed weaponry yet still feel the need to knock over a bank or a liquor store every now and then, which can push the edges of disbelief for me. Having a villain who is A) carrying on a family tradition and B) financing it in a way that makes sense is frankly a relief.

When writers do something that makes me, as a reader, have a question about a character’s action and then immediately address that question, it really helps pull me into the story. Judd Winick is really talented at doing that; ever since his lengthy run on Green Arrow I’ve come to appreciate his storytelling technique. He’s a writer that causes a lot of division amongst comic fans, and I understand some of the reasons why, but I feel that his writing talent should never come into question. In this issue Catwoman does exactly what I expected a smart hero to do when in a museum full of the villain’s creations–she dives right in, assuming there would be no way the villain would open fire on her for risk of hitting her creations. As soon as Dollhouse started shooting I became skeptical, but Catwoman’s inner voice answered my concern immediately–the presence of Catwoman in the once-secluded mausoleum has tainted the creations, so Dollhouse has no qualms about destroying them in order to get at Catwoman.

This title began with Guillem March on art, a choice I was initially positive about when it was solicited, but as the series wore on I grew a bit tired of March’s overly sexualized Catwoman. I loved Darwyn Cooke’s art with Ed Brubaker; that run, to me, is the best Catwoman story ever told. Adriana Melo’s work on Catwoman has previously been better than March’s, but this issue seems like it was rushed. There are a lot of places that the art doesn’t have that polished look that Melo gave previously, and the ears on Catwoman’s costume are inexplicably extra rounded, whereas they’ve been rather pointy up until this point. There are some positives: the scenes in Dollhouse’s museum are nicely done, and I already mentioned cracking up at the Cat-signal. Batman is drawn very well, and the set-up for the big last page reveal was handled perfectly from an artistic standpoint. Melo still has some areas to improve on, and some of those might just be handling deadlines better, but the art in this issue was still acceptable.

If you didn’t realize it, this issue marked the end of Judd Winick’s run on Catwoman. He’s received a lot of flack for his portrayal of Selina Kyle, but even new writer Ann Nocenti (most recently notable for writing an orgy scene in Green Arrow involving three girls who were functioning primarily as sex dolls and somehow not enraging every person who criticized the oversexualization of Catwoman and Starfire because Ann Nocenti is a girl and therefore is apparently allowed to sexualize women) has acknowledged the reckless fun way Selina has been written is a good direction for the character. This issue ends an arc which has seen an evolution of Selina’s responsibility and simultaneously wraps up some loose ends to prepare things for Ann Nocenti’s run. If you haven’t been reading the title, this isn’t a good place to start, but it was a good issue. Catwoman #12 earns three and a half stars out of five; it was above average, but the art dragged it down.