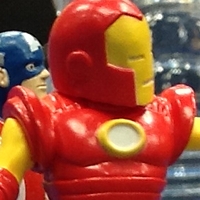 iOS games are popping up in booths across the exhibitor floor here at Gen Con 2012, and the people at WizKids caught my attention with a preview of their upcoming addition to the HeroClix line.

Coming this September fans of HeroClix with one of those fancy iPads will be able to experience a new element to the game that they love. Upon the release six figures will be available that will allow users to play in a normal Clix game or to go off on an individual campaign individualized for each character. The six figures that will be available are: Wolverine, Cyclops, Ice Man, Iron Man, Captain America, and Thor.

Each figure has three pads on the bottom on the base that, when prompted and set on the screen, will be recognized and your mission will commence. The gameplay goes away from the turn-based system and opts for a continuous battle experience. The box says that a screen protector is recommend, but if you don’t have one I wouldn’t worry seeing as the figure is only the screen for a matter of seconds. A pack of three characters will cost $14.99 and will be released this September.