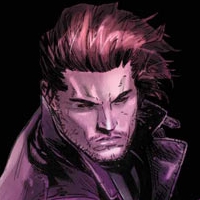 Hitting the #1 issue trend before it becomes all the rage with Marvel NOW! is Gambit. Is the solo book following the thief from the South worth your time? Major Spoilers gives you the low down ahead!

Previously in Gambit: Remy LeBeau was born a thief and lived like a street rat, but I just don’t buy that. Maybe if we only looked closer, would we still see a poor boy? No siree. We might just find there’s so much more to Remy.

THE NAME IS LEBEAU. REMY LEBEAU.

Gambit #1 beings in the only place that a Marvel book can, New York City. Remy is in his apartment thinking to himself about how awesome he is and vaguely on the matters that brought him to his current state. No specifics are given of what exactly has happened, which is great because then I would feel the need to look through the 15+ X titles currently going to figure out how we’ve arrived here. There are a few pieces thrown in, presumably for those who are in the know, with the art showing a picture of Gambit and Rogue and a few other things, but that is all.

The majority of the story revolves around LeBeau’s going to a party hosted by a new rich socialite in town who has an affinity for expensive items and gadgets used throughout the superhero community, but leaning more to the evil variety. Remy is able to lay down some serious Southern charm on a few guests, mostly of the female variety, which keeps the guards on alert, but does eventually help him with his get away. The sleuth bits worked really well as he makes use of fancy gadgetry to make way to a vault that included a full scale Sentinel, Dr. Doom figures, and some Green Goblin items.

What seems to be forming from this issue is a take on James Bond, but one with superpowers. All the elements are there: gadgets, charm, women, action, and an interesting accent. I’m interested to see if this thief storyline is one that continues to be fleshed out or if Gambit will soon return to saving the good citizens of NYC. As for me, I’m hoping for more of the first. If Asmus chooses to go that direction we could have a Breaking Bad situation on our hands, forcing readers into the dilemma of choosing to root for or against the “hero” that continues his misdeeds for no real reason other than he can.

Upon opening this inaugural issue I wasn’t overly impressed with the art, but my thoughts slowly changed as it went along. Mann used the layouts in a manner that gave the book a nice heist feel with some overlaying close-up shots. The few instances of action were nicely used to juxtapose from the dialogue scenes that filled the issue. My only slight quibble about the art actually comes from those conversation pieces. I may be in the minority here, but it bothers me when every time someone is talking their mouths are always shown shut. In some instances it does make sense artistically for mouths to be shut on panel while talking, but, honestly, Gambit’s mouth is almost shut through the entirety of the issue. But if I have to find a thing as small as mouth openness to nit-pick about you can know the art is well done.

With hopes that Gambit would draw me into a character I could honestly care less about, much like Hawkeye #1, I gingerly eased myself into the book. At the end I was pleasantly surprised about what came from this. You don’t need any background information (I didn’t have any) to jump right in and follow LeBeau as he goes back to his roots of thievery. I’m hoping that this title can stay away from any crossover madness, with maybe only the slightest of crossover with individual characters (one with Hawkeye could be awesome.) Gambit #1 receives 3.5 out of 5 stars for putting out a first issue anyone can jump on board with.