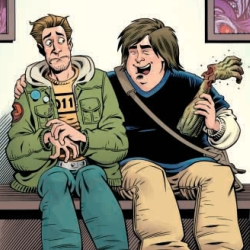 While most people complain about San Diego Comic-Con being taken over by major media outlets and losing its focus on comic books, consider the world lucky that it hasn’t been taken over by a horde of zombies like in Fanboys Vs Zombies! Major Spoilers takes a look at the BOOM! Studios title which has moved out of the convention center and into San Diego proper in what is touted as a “perfect jumping-on point for new readers!”

Previously, in Fanboys Vs Zombies: The Wrecking Crew is out of San Diego Comic-Con and now the entire West Coast (and possibly the world?) is filled with undead. That means it’s time to set up a base of operations and get to kicking some zombie butt!

A REASONABLE JUMPING ON POINT

I originally meant to pick up the first issue of this series and give it a try; I am not much of a fan of the zombie genre, but every now and then I like to dip my toe into the fetid pool and see whether or not it comes back out afterward. Since I never got around to trying issue #1, when I saw that this issue was labeled as a “perfect jumping-on point for new readers” in solicits I had to give it a shot.

Obviously I didn’t know any of the characters in this book, but I understood the basic premise; the zombie apocalypse had gone down while some friends were at San Diego Comic-Con, and now the Con is over. The opening of this issue is pretty heavy on continuity, and it took until the violence began for me to get on board. One of the characters has a comically oversized hammer and an outfit on that made me wonder if she had been cosplaying as Ramona Flowers at the con, and she uses it to great effect. One of the crew dies very quickly, in a moment that I’m sure would have had greater impact had I known him. In a really clever moment, later in the issue we see a door labeled “DO NOT OPEN” with his name on it in the base (known as Fort Awesome) and his remaining limb pressed up against it.

As a jumping on point this issue does work quite well after the initial three or four pages. One of the main characters is a famous actress who must have been at the convention, and rather than having the characters explain her origin, earlier we had been shown a poster for the movie she was in that featured her name and likeness across it.

Fanboys vs Zombies thrives on a light-hearted sense of humor, which when coupled with the normally sobering prospect of zombies serves to create a dichotomy much like that of Zombieland. There are some kitschy pop culture references that I had to groan at, such as when Kyle uses a DVD box set of a parody of “The Office” for target practice, saying “The UK version was better,” but even though some of the jokes seemed forced, they at least reflect the feel of the story.

The art in Fanboys Vs. Zombies #5 is about what you’d expect. There’s some definite anime-influence, and lots of over-the-top violence and gore. The women are super-sexy, and several of the guys are super-epic gunmen. The tone of the art suits the story perfectly. But the art itself isn’t perfect; there are a lot of sketchy backgrounds featured in this issue. There’s a montage where Kyle gives the reader a tour of Fort Awesome, and despite the fact that the whole point of the sequence is to show off the base, the base really isn’t drawn all that well.

There’s also a scene where not one but TWO characters seem to randomly lose their noses, which threw me right out of the story and into Rodrigo’s tirade about Courtney Crumrin’s lack-of-nose from the Major Spoilers Podcast. As usual I enjoy BOOM! Studios’ house style with the heavy inks and great coloring, but I wish either a little more detail had been put into the art or the story hadn’t called for the reader to pay attention to the art as much.

BOTTOM LINE: NOT MY CUP OF TEA, BUT EXECUTED WELL

This issue didn’t do anything to change my opinion on the zombie genre, but the irreverent sense of glee that serves as the book’s pulse was as infectious as the zombie plague, and I found myself enjoying it more than I expected to. That being said, the euphoria wore off quickly after I finished reading it, and I don’t know if I’ll be back for more or not. The book was written well (given the style it was working in) and the art fits the book–though there are some spots of shifting anatomy–so overall I give Fanboys Vs. Zombies #5 an above-average 3.5 out of 5 stars.