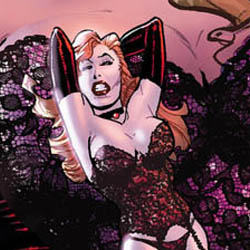 Or – “Better Believe The ‘For Mature Readers’ On This One…”

Comics in the year 1988 were a bit different than what we know today, with even the recently married Peter and MJ Parker not yet allowed to have the Ess-Ee-Ex, and even the kind of realistic violence of G.I. Joe wouldn’t have any casualties for another couple of years.  In short, things were different then.  Then, out of the black-and-white comics boom came Howard Chaykin’s Black Kiss, a book that paired sex and violence in unheard-of quantities, and set the industry on it’s ear.  What does the prequel hold?  Your Major Spoilers review awaits!

Previously, in Black Kiss II:  Set in the 1980’s, Black Kiss was the story of Dagmar Lane and Beverly Grove, both of whom have big secrets, and their efforts to claim a stolen pornographic film taken from the Vatican’s collection of banned material.  The story is somewhat hard to describe, but involves a silent film star, vampires, and the fact that Dagmar is a male-to-female transsexual and a dead ringer for Beverly herself.  (If you’re 18 and not easily offended, I recommend checking out the original.)  Before that, though, there was this…

THE TIMES, THEY HAVE A’CHANGED…

Being 17 for most of 1988, I remember hearing the controversy about Black Kiss through the fan press, but being unable to access a copy due to both my age and location in the geographical center of nothing-at-all.  We open this tale in New York, in the summer of 1906, and by page two, we’ve gotten to our first sex scene, set in a movie theater.  This setting allows Chaykin to really strut his stuff, delivering several lovely panels of movie history before everything goes right over the edge of sanity.  I’m not sure whether it’s a metaphor, a hallucination or the literal story, but when the giant succubus with multiple penises leaps out of the movie screen, I can’t help but be surprised.  What follows is both startling and disturbing, leaving an entire theater worth of people changed by the experience.  And then, we jump forward in time, making me wonder what in the world that was.  Chaykin’s art is fascinating and lovely here, and his rendition of the turn-of-the-century world is gorgeous and pretty accurate based on what I know.  Visually, even the squicky parts of a giant sex-demon attack are well drawn, and the narrative works well alongside it.

ONCE AGAIN, FOR THE CHEAP SEATS: MATURE. AUDIENCES.

Our story jumps about in time a bit, following Charles “Bubba” Kenton a names-changed-to-protect-the-innocent character on his way to America onboard a passenger ship… called Titanic.  In the Spring of 1912.  This is going exactly where you think it’s going, barring a nude prostitute or two, and for the fact that he is saved from drowning by being attacked by a succubus who is also on board the ship.  Kenton’s actions in the original Black Kiss get a little back-story here, and the explanation of what turned him into the more-or-less complete monster of the original tale is pretty shocking.  There is sex in these pages, but it’s tied to a plot involving supernatural elements, and comes across as more than a little bit disturbing to me.  Fans of Howard’s art will find a lot to enjoy in these pages, with the usual Chaykin flair, but story-wise, this is a pretty truncated chapter of things, with only my knowledge of the original Black Kiss giving it all context or meaning.  The historical settings are well-drawn and the use of narrative boxes quite entertaining, but this issue just doesn’t have enough (you should excuse the expression) meat to it as a single chapter, which I recall being a concern in the original Vortex series as well.

THE BOTTOM LINE: THE 1ST CHAPTERS OF AN ONGOING SERIAL…

I expect that many people will dismiss this one out of hand due to it’s sexual/quasi-pornographic nature, but I’d say that would be a mistake for some.  There’s a lot to like in this issue, if you’re not bothered by graphic sex acts of all flavors, and I’m at least interested enough to see what this prequel has to offer, but I cannot stress enough the level of violence, weird mystical mojo and unusual carnal acts we’re probably in for.  This issue works for me on the strength of it’s art and narrative, but even that is a qualified success, as I found myself surprised by the point where the issue ended.  Black Kiss II #1 was tasked with setting up the world and the expectations of this prequel, and did so intriguingly, with attractively quirky art but an awkward chapter break worked against the issue, earning 3.5 out of 5 stars overall.  Those of appropriate age and mindset will find enjoyable stuff here, but it ain’t for the squeamish…