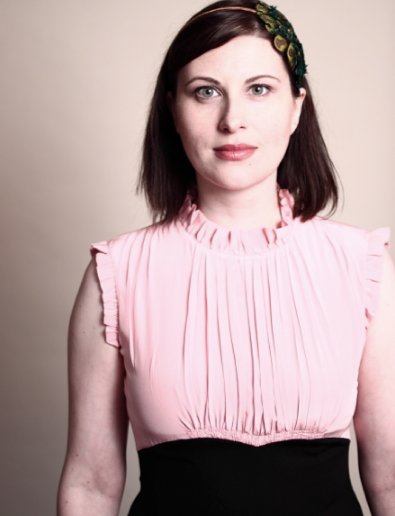 Actor/Producer/New Media Maven STEPHANIE THORPE brings the evolution of the ‘geek girl’ into the forefront, returning to Seattle as a panelist at the 2nd Annual GeekGirlCon 2012 on Saturday August 11 and Sunday, August 12, 2012.

Thorpe arrives at GeekGirlCon this year after a celebrated appearance on the successful panel “The Most Dangerous Women at Comic-Con” and the panel for her hit series “Shelf Life” at SDCC 2012. One of the most recognizable women in the fields of geek culture and content creation, Thorpe is a vocal advocate for building diverse and interesting roles for women. “As a producer, I’ve been able to create and tell stories in a niche I adore, sci-fi and fantasy. I grew up reading about strong female characters, and wanted to see them portrayed on screen. Specifically, I wanted to see more science fiction and fantasy so that’s what I’ve produced for the web. I’ve had the opportunity to be an actress, new media speaker, content creator, a writer, a producer and I love that the stories I’m contributing to the culture are contributing to the flourishing of all things geek.”

“Geek Girls Creating Their Own Films and Shows” pulls together a panel of female creators who took their love of the geek life and turned it into a career. Thorpe will be joined by: Kristen Nedeopak (The Skyrim Parodies, Fight Class), Bonnie Burton (SFX Magazine) and Christa Charter (The Sleepless Nanny).

“Geek Girls in Popular Culture” takes an in-depth look at how the landscape has changed over the years and what it looks like now. Thorpe will be joined by: Amy Berg (Eureka, Person of Interest), Cecil Castellucci (The Year of the Beasts, Boy Proof), Javier Grillo-Marxuach (The Middleman, Lost), Sarah Watson (The Middleman, Parenthood) and Sarah Kuhn (One Con Glory, Chicks Dig Comics).

Stephanie Thorpe is an actor, producer, content creator and renowned new media expert. She’s been a driving force as a producer and actor in numerous web projects including the critically acclaimed “After Judgment” (6 Streamy nominations), “Asylum” (NYTVF official selection, LA Web Fest winner, and just picked up by BET), Babelgum’s “Hurtling Through Space”, and Tyler Mane’s “The Mane Show”. She most recently starred in the Parsec Award-winning GOLD spin-off “Night of the Zombie King”, for which she was nominated as Best Supporting Actress by IndieIntertube, the New York Television Festival in 2011 & for 5 IAWTV Awards. Stephanie directed, co-produced and starred in the cyber-phenom “ElfQuest: A Fan Imagining” (elfquestfantrailer.com). Based on the classic comic book series by Wendy and Richard Pini, the project was an Official Selection at the 2012 Phoenix Comicon Film Festival, won Best Trailer at the IndieIntertube Awards, the Specialty Short Award at BaltiCon and the Silver Prestige Award at the Prestige Film Award Festival, and was also featured on a highly successful panel at SDCC 2011. Stephanie stars in & produces returning series “Shelf Life” (www.shelflifeseries.com), 2 new series she’s created, “The Ladies/The Gents” and “SlumberCon”, and will produce Mark Gardner’s new project “Weird Girls” (www.weird-girls.com). Up next, Thorpe is joining the cast of “Legendary: A Tale of Blood and Steel” with writer/director Barry Morgan (Koldcast original thriller “Arcana”). An expert on new media, Stephanie continues to speak at events around the country.