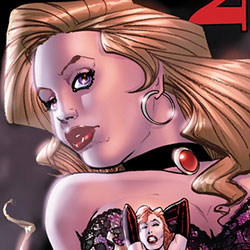 Alpha Girl #4
Our heroine is reunited with Sherman, everyone’s favorite pedophile, and we get down and dirty with the simplistically exotic Penny and her dedication to the tube steak. As our mighty gang of misfits journey to find Judith’s brother, who will fall? Are hillbillies taking over the world? Hold onto your butts, because issue 4 is a Hell ride of excitement and intrigue!

Black Kiss II ##1
Sex, death, and the movies – what else really matters?

And really, now – does it have to be so dirty?

Epic Kill #4
“You will never lead a normal life again. For the rest of your days, you will be hunted by the forces of the most powerful country on the planet. We got the law and large numbers on our side and you can’t kill us all!”

Godland #36
BOOK THIRTY-SIX: GOTTERDAMMERAGNAHABHARATA The universe performs the ultimate act of self-love, so make sure you’re there to rub one out with Adam Archer and the rest of his cosmic crew! You got questions? This issue’s got all the answers!

Harvest #1 (of 5)
Human traffickers. Rogue medical teams. Yakuza run organ mills and a six year-old drug fiend. Welcome to Dr. Benjamin Dane’s nightmare. His only way out? Bring down the man who set him up by reclaiming organs already placed in some very powerful people. If Dexter, ER and 100 Bullets had a three-way and that mind blowing tryst somehow resulted in a kid, that kid would read HARVEST. Medical Grade Revenge.

Mind The Gap #3
Lines are forming and fingers begin pointing as a clue to the identity of Elle’s attacker is found. Friends and families are strained, and a mysterious figure lurks in the shadows, ready to make a game-changing move. Meanwhile, Elle’s struggle to regain her memory finds her starting from the very first memory she has — and it’s a shocker!

Mondo #3 (of 3)
Y’know those kinds of days when your fuse is so short, you explode at the most mundane circumstance? Mondo doesn’t have those days because EVERY day is that way for him, and in the third and final issue of this explosive ‘Roid-Raging series, he’s about to outdo even himself.

Spawn #222
SPAWN’S 20th ANNIVERSARY CELEBRATION KICKS INTO HIGH GEAR! THE NEXT CHAPTER IN THE SECRET HISTORY OF JIM DOWNING! AND THE RETURN OF TREMOR!

SPAWN and Tremor join forces to uncover the secrets of the clandestine military project that made them both monsters. The history of the SPAWN universe and Jim’s place within its vast mythology continues to unfold as new details and mysteries come to the forefront.

Thief of Thieves #7
The conclusion of the first story arc of this hit new series! Unfortunately for Redmond, despite all his efforts to the contrary… nothing goes as planned.

Think Tank #1
FIGHTING THE MAN… WITH SCIENCE!
Dr. David Loren is many things: child prodigy, inventor, genius, slacker… mass murderer. When a military think tank’s smartest scientist decides he can no longer stomach creating weapons of destruction, will he be able to think his way out of his dilemma or find himself subject to the machinations of smaller men?